Brick and Block: Is it Efficient?

Paul Wagland examines the credentials of the much loved build system

According to the Traditional Housing Bureau, brick and block construction remains the most popular method for self-builders in the UK, with around 70% of you choosing it. These houses have a solid, traditional appeal, as the external wall of the dwelling is built in brick. The internal skin of the house is block built and the cavity in between can be filled with a selection of different insulating materials. At regular intervals the inner and outer skins are affixed with wall ties, all of which adds up to a very strong wall that has excellent thermal and sound-insulating qualities.

Brick and block’s solid mass absorbs heat during the day and radiates it for a number of hours after dark. In fact, bricks have been shown to hold warmth well into the night, which can help to significantly cut down on heating bills. This effect can make a difference of between 5 and 8 degrees C. Thermal efficiency is also a boon in summer during the day, as the interior remains cool, whereas thin-walled properties can get uncomfortably hot. During winter, brick and block walls can help to prevent the heat you generate inside the house from escaping, as they can have exceptionally low U-values.

If you want a brick and block house but are concerned that it won’t be as green as timber frame, there is plenty you can do to allay your fears. Various package companies offer an interesting selection of green energy options, with even more available if you choose the bespoke route – from geothermal heating to solar power and photovoltaic panels. Organising rainwater harvesting, wind turbines, passive ventilation and heat recovery at the design stage of your build will all help to make your home more sustainable. For a super-green build, Design and Materials offer building blocks made from recycled waste.

Plastered blockwork also offers about 50% more sound insulation than plasterboard or studwork – a key factor to consider if you have teenage children or noisy hobbies and you want to avoid noise travelling between rooms or floors. A high level of acoustic insulation is also important for anyone who works shifts, lives in a busy area or simply appreciates peace and quiet.

The reduced noise transmission between rooms is often cited as the main advantage of brick and block homes. “Most housebuyers look for solidity,” says Robin Batcheldor, BuildStore, “and this still means bricks and mortar to many people.” However, those interested in timber frame should be aware that it can be cost effective to build a timber structure and clad the exterior in brick.

Financial considerations are central to any self-build project, and this is another reason for the continuing popularity of brick-built homes. It’s often possible to pay for bricks in installments as and when you need them.

If you have a stage payment mortgage this may be far more convenient than forking out for a timber frame up front. However, if you’re choosing reclaimed or hand-made bricks and need a colour match, buying in batches may not be an option unless you can be certain that more of the same batch will be available at a later date.

Reclaimed bricks have several advantages despite their higher cost. Old bricks have often been handmade and they will have weathered over time, so they have an aged appeal that is very hard to replicate. This makes them a great choice for an extension or outbuilding that is being made to match an existing property, or for new builds that need to blend in with a historic area.

Reclaimed bricks are also an environmentally-friendly choice, as you are simply reusing an existing resource. Whether you salvage them on site or order them from further afield, they will still tend to be a greener option. On average, the energy used per mile per tonne of freight by road is around 0.0056GJ. Put simply, this means that if you buy reclaimed bricks they would have to travel 800 miles to have the same embodied energy as new ones made right on your doorstep.

Of course it is a shame that many perfectly good buildings are being demolished rather than re-used, but there is no evidence to suggest that the demand for salvage is encouraging demolition. Building with Timber: Post and Beam
by Anna-Marie DeSouza
Next Article 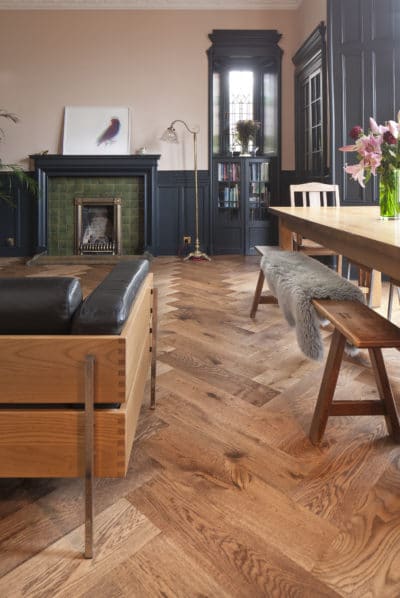