It’s inevitable, living in a thatched house, that re-thatching will be needed at some stage. We were fortunate that most of ours was in excellent condition and has many years life left in it.

For some reason, however, one slope of the rear projection was not attended to at the last re-thatching and was in a bad state.

The ridge was also worn out – this aspect of a thatched roof has a much shorter life than the remainder of the covering.

There are a lot of thatched roofs in Devon and many thatchers.

Fortunately for us, two of the best work locally and have teamed up to deal with the difficulties caused by Covid and various lockdowns.

We still had to book eight months in advance, but in due course we erected a scaffold and Keith and Sean set to work. Before: The old thatch roof was mostly in excellent condition, but required some work on one of the slopes

It was fascinating to watch fine craftsmen undertake such a longstanding, traditional skill. Over a four-week period the failing slope was stripped and re-thatched, followed by a new ridge over the whole roof.

The longevity of a thatched roof depends on both the skill of the thatcher and the quality of the material available to use.

We were very happy to have access to a good quality batch of Romanian water reed that should last well.

After: The updated thatch roof now looks fantastic and gives the exterior of the home a smart finish

This was particularly satisfying because a few years ago, we were lucky enough to stay with a Romanian reed cutter in the Danube Delta. It’s always good to feel a connection with what goes into your building.

A setback with the chimney

At the back of the house is a chimney that has always caused problems. In the mid 20th century the original chimney, which passed through the apex of the thatched gable, was removed (we can still see the stub in our roof space).

It was replaced by a new chimney to serve a Rayburn cooker that had been installed in the kitchen, and it cut through the sloping eaves of the thatch. This is a really bad detail that is extremely challenging to properly weatherproof, and it had consequently always leaked. When we stripped back the internal fabric around it, everything was saturated, there were signs of very long term water ingress and a whole series of unsuccessful past repair efforts.

We applied for listed building consent to remove the chimney on the basis that it was modern, visually inappropriate and represented a significant threat to the building fabric because of the persistent water penetration.

We could show that it was built of engineering bricks bedded in cement mortar and it has the beginnings of a worrying lean that presages more problems in the future. Unfortunately, we were refused listed building consent, despite our best arguments – chimneys are considered to have very high streetscape value.

This was our only failure throughout the extensive planning and consent process, so we’ve done pretty well. Nonetheless it was annoying and left us with the problem of trying to resolve the leak issues more successfully than our predecessors. 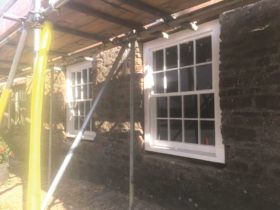