Clive and Linda Parry had lived in Bromley for over 30 years when they decided to move to the country. While their two children were growing up and the couple were both working full time, urban life had worked well for all the family. However, once the kids had left home and Clive retired from his job as a sales manager, the pair wanted a more rural life. Making the decision to radically alter their lifestyle was relatively easy – finding their dream location proved a little trickier.

Linda and Clive had a fairly comprehensive list of requirements for their next abode, so sensibly gave themselves a generous area in which to search. They drew a wide arc south from Bromley that took in Surrey, Sussex and Kent. The house had to be within an hour or so of their children and be close to a busy town with all its amenities. Most importantly, it had to be a in a quiet location with a superb view, with a good pub in walking distance.

The Parrys looked at many types of property across their search region but nothing was quite right. The large traditional dwellings they saw had lots of bedrooms but the individual rooms were small. On the other hand, the newer three-bedroom builds felt poky and were often constructed poorly.

After three long years spending their weekends hunting for the perfect opportunity, the couple finally realised that any existing house (old or new) would need amending in some way to suit their lifestyle. It was at this point their thoughts turned to building their own home from scratch, so the couple’s search for a house then became a quest for a plot.

Clive and Linda were delighted when they found a wonderful opportunity in a small hamlet in East Sussex, positioned only a few miles from Tunbridge Wells. The site included a traditional weather-boarded cottage, but it was damaged and riddled with woodworm so needed to be demolished.

Hidden from the road behind the old village shop, the secluded plot was flat and had services in place. These included mains drainage and mains gas, which is a rare find for rural properties. But the biggest attraction was the glorious outlook across fields and woodland. he new home features a grey and white external palette. Wood-effect fibre cement cladding has been paired with a bright coat of render. The grey windows and roof add to the contemporary feel

“We were determined to have a gorgeous view,” says Linda. “It was one of the most important things on our list and I’m glad we didn’t compromise on it.”

Before going through with the purchase, Clive and Linda submitted a pre-application to the local council for permission to replace the existing house. They were advised that planning would probably be granted, providing they comply with various conditions. Firstly, the new house could have no more than three bedrooms.

As the plot lay in an area of outstanding natural beauty (AONB) there were other stipulations, too, regarding the style of the build and the materials that could be used in its construction. East Sussex is known for traditional weatherboard finishes or tile-hung properties and the planners were keen to see a design that was in keeping with the area.

“It’s important to get an idea of what the planners will accept before starting the process,” says Clive. “Otherwise, you could waste time and money on something that will never be approved.”

With the guidelines in mind, the couple commissioned Nick Blunt from Urban Curve to design their home and submitted their first full planning application. There were a few revisions over the following months – the planners insisted on seeing samples of the roof tiles, render, windows and even the weatherboard.

There were some objections from a neighbour, too, but within a year full consent had been granted and the next phase could begin.

The couple had worked out that they could afford to finance the purchase of the new property and the initial works without selling their Bromley home. This kept stress and upheaval to a minimum, although the pair admit that there were still many sleepless nights. “There are so many decisions to be made and sometimes we’d find ourselves discussing things in the middle of the night,” says Clive.

“Although we were lucky to be able to pay for a large part of the build upfront, we knew we had to sell our existing home to complete the project. When the sale fell through at the eleventh hour we had to take a bridging loan for three months to finance the last part. The property did sell and everything was fine in the end, but it was stressful.”

Although they had never built a house from scratch before, Clive and Linda had taken on some major renovations, including a large extension and a loft conversion, so they  were not completely inexperienced.

They dedicated plenty of time to researching their upcoming project and reading advice-led magazines like Build It. They also invested hours on the internet and visited shows, eventually coming up with a shortlist of potential construction companies. In the end, the couple decided to work with German package house provider Hanse Haus, as they were impressed with how accommodating the firm was. “We showed our design to several other people but they were either too expensive or unwilling to be flexible in the same way Hanse Haus was,” says Clive.

There were a couple of tricky design features, such as the corner of the kitchen-living area where two large windows meet. “We wanted that corner to be as open as possible so as not to block the beautiful view,” says Linda.

“This wasn’t easy as it supports a corner of the house. The team at Hanse came up with the idea of using a slender yet strong metal pole, which is unobtrusive and works brilliantly.”

The planning permission only allowed for a certain size of house to be built on the site of the previous cottage. However, Clive and Linda were keen to find a way of creating some extra space for a gym, laundry and a plant room to house the services for the property.

The couple’s designer advised that many local authorities differ in their specifications for allowable volume, and that their council excluded basements from the calculations. Therefore, the couple opted to include extra space below ground that would not extend beyond the acceptable footprint.

Hanse Haus do not offer subterranean works as part of their package, so the Parrys used another German company, Glatthaar, who specialise in basement construction. Crafted from oak, the curved staircase is one of Clive’s favourite design features in the house

Clive and Linda had been led to believe that the soil on their building plot was comprised of sandstone, but they soon discovered it was actually a mix of sandstone and clay.

Unfortunately, they hadn’t anticipated the costs involved for the removal of the latter, which added a few thousand pounds extra to the budget as clay is heavy and expensive to shift. “We didn’t have a choice,” says Clive.

“It had to be removed and that costs money. That’s why a contingency fund is crucial, to cope with unexpected outlays like this.”

By December 2017, the site preparation and groundworks had been completed by SDG Groundworks, who dug the hole for the basement and prepared the garage’s concrete slab. Glatthaar then constructed the prefab reinforced concrete basement with extra tanking membranes to ensure no future damp issues.

The company was also responsible for creating the concrete floor slab that the final house would sit on. This part of the build took only a few weeks.

“Glatthaar and Hanse Haus are accustomed to working closely on builds like ours,” says Clive. “That makes the whole process easier.”

Clive and Linda had taken advantage of the package firm’s process by visiting its showrooms in Germany to choose the components of their house, from windows to light switches.

The building arrived in sections, with the main structure assembled in just five days. The timber panels had been prepared for pipes and cables in the factory. Even the positions of sockets and switches were predetermined, so once on site it only took a further 17 weeks for the German team to complete all the plumbing, electrics and final finishes, leaving Clive and Linda with only the kitchen to install.

The couple were delighted with the excellent build quality and the work ethic of the team that came to erect the house. “They were absolutely fantastic,” says Linda. “I couldn’t fault them. They worked really hard, were super-efficient and very cheerful.” Clive and Linda were keen to create an energy-efficient home that was filled with light, easy to maintain and comfortable to live in. The house features large triple glazed windows serving the dual purpose of letting sunshine in and preventing too much heat from escaping.

Another important aspect was for the house to be large enough to accommodate family and guests (there are two spare bedrooms) but not feel overly large for just the two of them. Therefore, it was important to get the space allocation just right.

The sitting room is big enough to entertain in but small enough to feel cosy. The kitchen-living area works beautifully, with seating at the island, plus a table, in addition to a sofa and chairs that have been positioned to take advantage of the uninterrupted views.

The pair opted for a mechanical ventilation and heat recovery system (MVHR) which, coupled with the high insulation value of the building, performs very efficiently. To reach such high standards it’s important that any possible draught points are excluded. Even the letterbox is housed in the porch, outside the thermal envelope.

Clive and Linda each have a favourite element of the newly finished house. For Clive, it’s the bespoke oak staircase that gently curves around to connect all three levels, providing a feature that’s both practical and elegant.

For Linda it’s the glorious views across the famous Wealden countryside. She can often be found curled up on the chair in the corner of the open-plan kitchen-living area, watching the farmer’s gaggle of geese stroll past the window.

The couple have learnt a lot from their self build and have emerged from the process unscathed and extremely happy in their new, low-maintenance home.

“In the past there was always a list of DIY jobs to do at the weekend. That doesn’t exist anymore, and I don’t miss it.” says Clive. “I may even be forced to take up golf!” 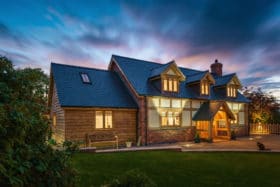