Murray and Lorna Gray have self-built on the exact Isle of Skye spot where they spent their honeymoon two decades ago. The picturesque sloping plot now plays host to a spectacular bespoke family home

Some plot searches are more focused than others; perhaps none more so than that of Murray and Lorna Gray. The couple, who were living in rural Perthshire when they bought this site, actually spent their honeymoon on the spot their new home now occupies on Skye’s Waternish peninsula.

“It was never our lifelong plan to return to the area; it just worked out that way – it feels like a circle of fate,” says Lorna. “We’ve had a picture of the views from this area of Skye on our living room wall for the past 20 years. The kids say that all their lives they’ve been looking at a photo of the setting, and now they get to see the real thing – although the picture’s back up in this house!”

With their children starting to move away to study, the Grays began thinking about changing their lifestyle. “We originally considered taking on a renovation project, which is something we’d done in the past,” says Lorna. “Our existing home was a Scandinavian kit build and we’d done quite a lot of work on it when we moved in. It had great views over Strathearn and the mountains and we knew we wanted our new house to offer similarly fantastic panoramas.”

In fact, this became the most important factor in their search for the perfect location. “As we started to look around Scotland, the idea of a new build started to take hold – and we also thought it would be great to try a sea view,” says Lorna.

As luck would have it, the pair discovered this plot – which meant so much to them – was up for sale. Before they bought it, Murray and Lorna approached architect Alan Dickson of Skye-based Rural Design to offer his advice. Having spent a number of family holidays there, the couple were familiar with other houses on the island that the practice had created in the past. “The site has cracking views but it is very steep,” says Alan. “Nevertheless, I suggested that we could achieve something suitably impressive without worrying too much about the slope. Clearly there would be a bit more cost – but it wasn’t going to make the project unviable. It’s always worth looking at whether you can put a bit more budget into the plot: you can change your house, but you can’t change the views.”

Alan took the Grays’ brief for an upside-down house that would take full advantage of the views and looked to create something where the site dictated the building’s form. “The slope presented something of a challenge, so I worked on the idea of a narrow plan,” he says. “This minimises the amount of potentially costly excavation required and, as it’s just one room deep, every room in the house benefits from the views – so it’s a win-win situation. It’s a simple philosophy that unlocks lots of possibilities.”

The house has been spread over multiple levels, with the lowest accommodating an annex. The entrance is on the first floor, which also hosts two bedrooms, the main bathroom, the garage and a storage area large enough for the family’s sea kayak. The main open-plan kitchen, dining and living area is on the top level, along with the master bedroom.

Rural Design has been building on Skye for over a decade, so Alan is very familiar with what does and doesn’t sit well with the local council – and there were no issues gaining planning permission. The scheme went on site in May 2014, with Murray and Lorna taking on a significant amount of the project management in order to keep the scheme within their budget. Having sold their family home to fund this new build, the couple commuted from a small Perthshire flat every weekend and during holidays to supervise progress.

“This is our first self-build, so it was quite a leap of faith for us in the beginning,” says Lorna. “We were signing pretty big cheques and, at the early stages, it feels like you don’t see much of a return. The main construction phase coincided with a wet winter, too, which wasn’t ideal – but our builder was great.”

What emerged following nine months of hard work and dedication was Deckhouse; a contemporary timber frame building clad in larch and rendered blockwork, with a sleek slate roof. The structural panels are insulated with 150mm of Rockwool flexi batts, plus 25mm of Quinn Therm internally.

The couple didn’t come across any major problems during the build, but keeping within budget was a challenge. “We were always sure that we would put our money into the structure – we were clear about that,” says Lorna. “Our priority was to make certain that we got the best possible design and build quality.”

They were very careful when sourcing and costing the interior finishes. “We had to put a lot of thought into keeping the costs down, which forced us to be creative,” says Lorna. “For example, we were going to tile all five of the bathrooms, but we had to make savings so they’re only partially tiled. I think they look nicer for the variety.”

Maintaining a close working relationship with their builder, Robert MacQueen from RK Joinery, yielded plenty of benefits. “Robert asked me what I had in mind in terms of creating storage areas. I gave it a lot of thought and came up with a TV surround that doubles up as a log store,” says Lorna. “The shelving in the dining area is much deeper than normal and holds so much, which is fantastic. Joinery details such as the oak worktops and window cills really help lift the interiors.”

The couple have quite deliberately refrained from filling the house up with furniture and bric-a-brac. “I wanted this to be a modest building where the architecture would speak for itself. It works so well as a home – it’s the best I’ve ever lived in,” says Lorna.

“In terms of its footprint it’s actually smaller than our previous property, but it feels bigger. The height of the roof helps to create a real sense of airiness and space. Plus the views throughout the house are amazing – hence why I have barely any curtains or pictures on the wall.”

The pair found the project to be a real learning process; but one they enjoyed. “We put a lot of trust in the architect and builder,” says Lorna. “There was good communication between all of us and it really paid off. I’d do it again, because you get exactly what you want.” 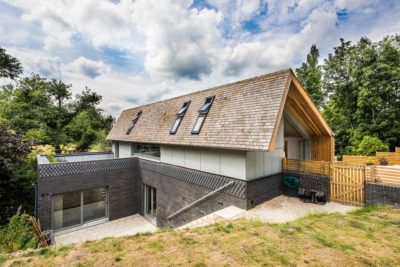