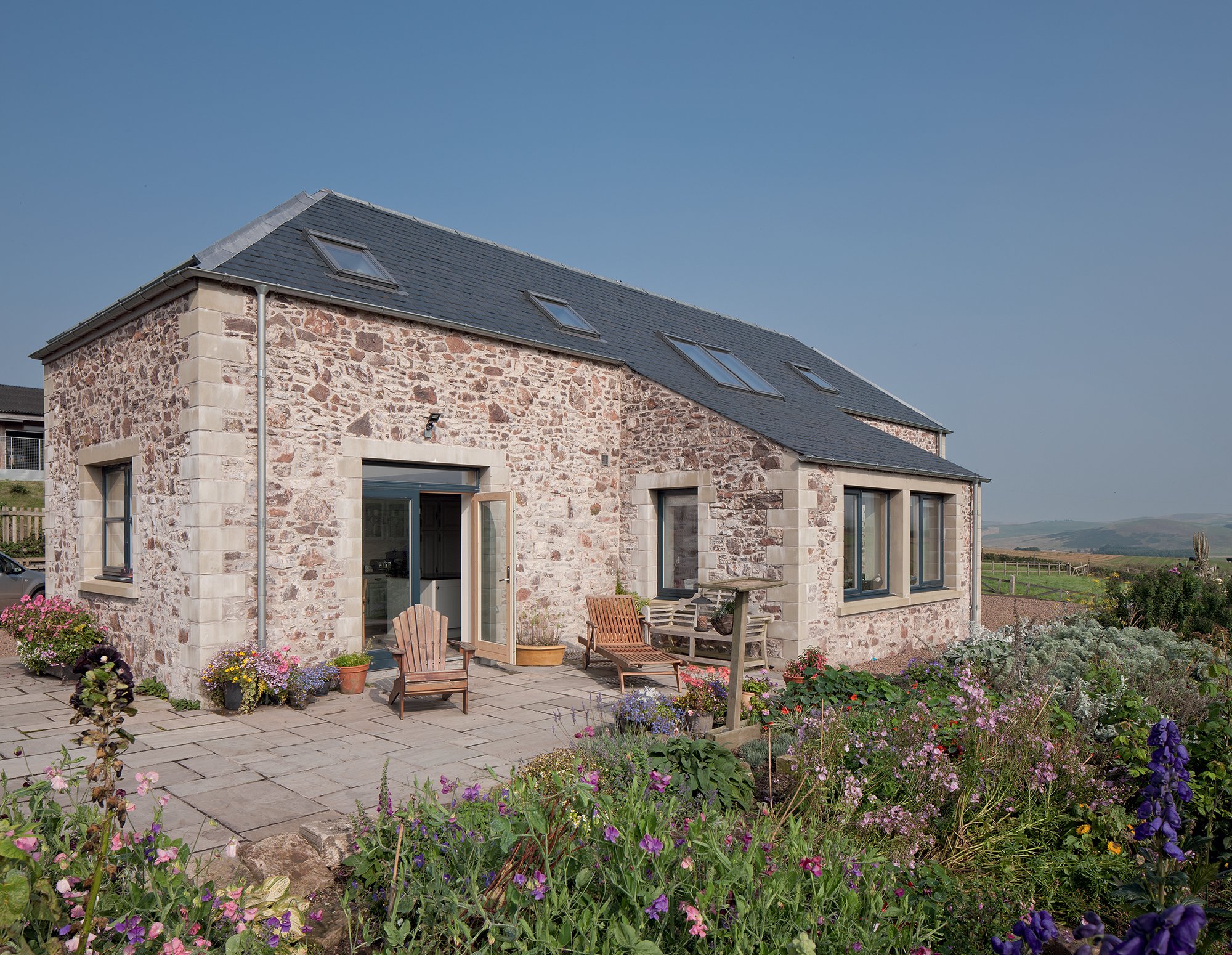 Harriet and Rob Graham moved to the Scottish Borders in 1999 and used to ride past a derelict cottage most days while out on their horses.

They had always admired the lone building, with its panoramic views across to the Cheviot Hills and the scattering of farmhouses in the distance. But they never imagined they’d end up renovating the cottage for themselves.

“It struck us as such a lovely spot; a really bright location, even in mid-winter when it catches the low sun. However, the idea of living here was a pipe dream for a long time,” says Rob. “Our current home was only a five-minute walk away and we were happy there; we had no intentions of moving.”

Further down the line, the people who owned the old building got planning permission to renovate with the intention of doing the work themselves. However, a few years later they told their neighbours, the Grahams, their circumstances had changed.

“We’re a close community, so they knew we loved the spot,” says Harriet. “In October 2010 we came to a private arrangement to buy the cottage and 12 acres of land for our horses. As their planning consent was close to expiring, we decided to make a start on our own application with the aim of moving in before the following winter.”

The cottage hadn’t been lived in for 45 years and was a ruin with a temporary cow shed at one end, no floors upstairs and ugly metal windows that had been installed at some point over the years – but it was well known in the community.

“When we talked to local people about our plans, several remembered relatives that had lived there over the years, tending sheep or working on the farm, so it was important to retain as much of the history as we could,” says Harriet.

Being just the two of them, the Grahams weren’t interested in increasing the size by more than the permitted 25%, and including lots of bedrooms wasn’t a priority either. Creating an energy efficient property was high on the agenda though, as was a home suitable for retirement.

They also wanted a separate stable block for their horses. Fundamentally, the original shape and feel of the cottage was to be retained, yet the interiors and glazing reconfigured in order to make the most of views out and draw in as much natural light as possible.

“We liked the character of the building and its distinctive hipped gable ends,” says Rob. “We came up with the idea of installing glazing that followed the same shape at either end, which makes the inside bright and airy, and the outside look quite different.”

Even though the couple felt the feature doesn’t makes the best use of the internal space, they weren’t concerned. “We don’t need lots of unused rooms like we had in our old house; we wanted to live in the whole property all of the time, with a focus on light and views.”

The Grahams researched eco-friendly design in great detail and sought advice from their architect, Gordon Melrose, who’d been recommended by the previous owners. They went to see a couple of projects that he’d worked on with builder, David Palmer, from Gilbert Developments, who also spoke highly of his work.

“Gordon and David had a good relationship and we liked the houses they’d created together,” says Harriet. “Gordon understood we didn’t want a standard three-bed and came up with lots of great ideas, especially when it came to working out how we could include the glazed hip windows – a crucial element for us.” It was at this point that all parties involved could see what poor shape the cottage was in. They questioned whether the structure should be demolished and rebuilt, recycling as much of the stone as possible.

“The planners refused so we continued on with a design for a full renovation,” says Harriet. “This meant repairing and retaining the existing walls and building a new extension.”

Gordon submitted their plans in January 2011 and approval was granted in March. By now, the Grahams had asked David to complete the works and he’d given them a quote of around £250,000 for the job. Finances were tight, so Harriet raided some of her pension pot and the couple remortgaged their current home.

“We planned to sell and move into a caravan on site, but we didn’t have to in the end because Harriet unexpectedly inherited some money,” says Rob. “Cash flow was tricky, though, because the proceeds from the sale of inherited assets came through in dribs and drabs.”

Towards the end of 2011 and into early 2012, Gilbert Developments constructed the stables,and in August 2012 work began on the old cottage. The idea was to build a structural frame inside and dig down to support the old walls.

“Unfortunately, when the diggers came in, we could quickly see there were no foundations, just these huge, gaping holes under the walls,” says Harriet. “Then one of the walls cracked all the way down – and we didn’t even think that was the worst one! So we called a stop to the whole project immediately.”

Gordon went back to the drawing board, revising the plans for the entire property to be reconstructed from scratch and preparing a second planning application.

Tweaking the design meant added floor space and scope for more insulation. It also enabled an office area at the front of the cottage where the porch had been, and relocating a new porch to the side – although they didn’t build this in the end because it seemed too dark when the internal wall went up. This time the planners saw sense. Time and money had been wasted, but Harriet and Rob were philosophical about the outcome. “It wasn’t the end of the world because we weren’t living in a caravan – we were still in our comfortable home,” says Harriet.

“We also made the conscious decision to halt the works for winter in order to collate our finances and avoid bad weather, which so often causes problems when building in Scotland.” David’s team returned to dig the foundations in September before shutting the site.

In May 2013, the project picked up for the second time, with the erection of the timber frame followed by the roof. Harriet popped by when work permitted to see how the build was progressing, but Rob’s job overseas meant his visits were less frequent.

The site was connected to mains electricity, a new borehole was dug (previously water had been pumped from a stream) and a few months later, in October, the contractors came to install the hip windows.

Harriet wasn’t on site that morning, but as she was returning home she looked across the hill and her heart fell. “There were two windows sticking out of the roof and I was horrified,” she says.

“The whole idea was to have a bedroom with floor-to-ceiling glazing that looks out across the view, but we had a beam cutting across the outlook. On reflection, the price was very cheap and perhaps that should have been a warning to us all that the contractor didn’t really understand what we were trying to achieve.”

Read more: How to deal with poor workmanship onsite

Work stopped at once and a new firm was recruited for the job. They came to site and listened closely to what Harriet was asking, coming back with a solution in December. “We lost money and ended up paying double what we expected for the windows but the hipped glazing was so integral to the design I couldn’t compromise,” she says.

The build continued through an unusually mild winter without any delays, enabling the stone facing to be completed. By July 2014 – the agreed end date – Harriet and Rob were able to move in.

Unsurprisingly, the final build cost came to 50% more than their original budget but, looking back, the couple feel they would have still made the same decisions. “If we’d been on a tight budget we’d definitely have come unstuck,” she says.

Some elements included in the quote were a more basic spec than the Grahams wanted to have, such as the kitchen and bathroom. They also chose more expensive aluminium clad window frames to stand up to the elements. “We wanted to do the house justice,” she says.

The Grahams’ pretty cottage looks every bit the renovated building it was supposed to be thanks to the recycled original sandstone, the detailed workmanship and natural slate. But it’s the glazed hipped roofs that really catch the eye.

Light pours into the kitchen at one end of the property, and into the living room across towards the mezzanine master bedroom at the other, encapsulating the mood of the changing sky. It’s an important feature in a region where the days are short in the winter and very long in the summer.

The couple are immensely pleased with their new house – and relieved they had to knock the cottage down after all. “Our home is sturdy, lovely and warm,” says Harriet.

“We have the sun on our faces in the morning and see beautiful light on the hills in the evening. The views are just wonderful; it’s such a joy to live here.” Contemporary Passivhaus in the Countryside
by Jane Crittenden
Next Article