There are not many folk who can say their property is an old forge that’s been in their family for the best part of 200 years – but Clare Crossley is one of the lucky ones. “My mother’s great, great, grandfather was a blacksmith and worked in the forge in the 19th century, which is behind the house where my parents now live,” she says.

“We don’t know when the two buildings were constructed, but when we converted the forge into our home, the surveyor thought it might have been some time in the 18th century.”

The renovation of the property was as much about keeping the building in Clare’s family as it was about preserving a historic relic and creating a home for herself and her husband Neil. Clare’s great-grandfather was the last blacksmith to work in the forge, which closed in the 1940s, after which it became a workshop and storeroom for the nearby family home where he lived with Clare’s grandmother and great-uncle.

Fast forward to the 21st century and the forge has an appealing historic charm where it rests in the grounds of Clare’s parents’ home, backing on to open fields on the edge of a West Sussex village. The quaint single-storey building is clad in its original flint and red brick quoins (with two ‘new’ timber additions at either end that came later), and an ancient turning circle once used by the horses still remains outside.

English Heritage was impressed with the building, too, and gave the forge grade II listed status in 1984. “Since then my family have had a duty of care to maintain the property,” says Clare. “Which is why, after my parents came to live here in 2000 when my grandmother passed away. They put in supports and a new roof to stop it from caving in.

Clare and Neil went online to their local council’s website to see what advice there was about converting this type of structure. After conversations with both the planning and listed buildings departments, they were strongly advised to only apply for permission to convert the forge into an annexe to the existing house, rather than into an independent home.

The council stated the site was outside the village’s built-up area boundary and in a rural location where planning does not allow new dwellings to be constructed. “It was frustrating, as it meant we couldn’t later sell the property separately from my parents’ house –but on the other hand, we couldn’t see ourselves ever really wanting to sell anyway,” says Clare.

The council’s website also proved helpful in finding Valerie Hinde, a local architect experienced in building conservation design. The conservation of grade II listed buildings is largely concerned with preserving the outside appearance of a building. As this mainly affects doors, windows and the materials used, Valerie made sure that her design worked around the existing openings as well as minimising any new apertures.

Since the ‘new’ timber outbuildings weren’t listed and were out of keeping with the original forge, Valerie also proposed rebuilding them in matching flint and brick to improve the overall appearance of the property. This would then make those spaces liveable, allowing the Crossleys to have a house with a bigger footprint.

Although the couple had the backing of the parish Village Society, the listed buildings officer rejected the initial design. Valerie went back to the drawing board and a revised, scaled-back plan was approved in October 2008. The revised design was for a single-storey, one-bedroom property with one of the old blacksmith’s hearths converted into a fireplace, and both existing chimneys being retained.

Like their architect, the Crossleys found their construction team on the council’s website. As specialists in building conservation, they proved to be the linchpin in the project’s success. “Both Martin Sewell and Ron Robson, our project manager, were absolutely brilliant from the start,” says Clare. “They were helpful, reassuring and we had weekly meetings so there were no nasty surprises. I can’t speak highly enough of them.”

The conversion began in August 2010 and as both Clare and Neil were working they let Ron and Martin get on with the project. “We had a budget of around £150,000 and Martin gave us a quote for the job,” says Clare. “Then we were given variation orders every week so we could see where the money was being spent. They were so brilliant; we knew the house was in good hands.” 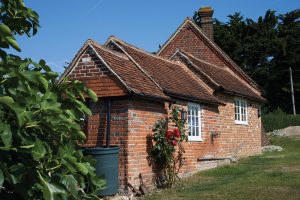 During the project, the newer unlisted parts of the building were underpinned before being rebuilt with brick and flint. However, new posts and structural supports were put under some of the existing overhead beams in the original forge, so the roof wasn’t supported by the original external walls.

Where new oak beams were needed they were distressed to make them look old, and then all the exposed timbers were sandblasted to clean them up and give them a unified appearance. A new roof was built underneath the old one to allow for insulation, while damp was combatted with a waterproof membrane lining the walls and floors.

The conditions of planning and listed building consent meant that materials had to be reused or matched as closely as possible. Fortunately many of the bricks and tiles were still in good shape, and for the shortfall, reclaimed products were sourced locally.

When it came to preserving the blacksmith’s hearth, the original bellows were donated to the Weald & Downland Open Air Museum because they were so big. The hearth itself was buried under a mound of earth and had been built off the dirt, so when the team got to the bottom and saw there were no foundations, they shored it up and reconstructed the base.

The ‘new’ fireplace that Clare now loves was built using reclaimed bricks, with dirt rubbed into them to make them look older than they are. The units were then sealed with silicon to reduce the dust.

Clare and Neil moved into their new home in April 2011 and haven’t looked back since. They’re delighted not just with the house’s original features, but the stories that are woven into the fabric of the building. “We absolutely love living here – but it was an emotional project,” says Clare. “My family history and my childhood memories have made the forge so much more than a house. But we feel very, very lucky and honoured to have had the opportunity to do the work and build our forever home right here in this special place.”