Alec Colvin-Smith & Inese Jurevics took on a project to convert some former stables in the Scottish Borders, turning a collection of old stone buildings into a characterful new home

Alec Colvin-Smith’s family have resided in Ashkirk – a beautiful part of the Scottish borders – since the 19th century, and his elderly mother still lives in the family home. Up until 2008, Alec and his Australian-born wife, Inese, were content living in Newcastle, where they run a commercial property management business.

But with the commitments that come with ageing parents they found their trips to Scotland – and also over to Australia – were growing in frequency. “Our previous home was quite isolated so we’d started feeling concerned about security when we weren’t there,” Inese explains. “We knew there were some old stable buildings in the grounds of Alec’s mother’s house. Converting them into our new home seemed like a good way to tie up all our loose ends.”

The main stable block was built sometime in the mid- to late-19th-century, and is double height because of its hayloft. It was in a reasonable state as it had been used for storage in recent years. An adjacent cart shed and tack room were more dilapidated, and the lean-to garage on the other side was a newer addition.

“Our new home is next to the kitchen garden so Alec’s mother signed this over to us too,” says Inese. “It was ideal as the gardener lives close by and keeps an eye on our house while we’re away.”

In November 2008 they spoke to a local architect about their ideas, but they were disappointed with the resulting pastiche design, as they wanted a home that looked more in keeping with the area. The following year they were recommended a practice based in Selkirk – Stuart Davidson Architecture.

“Stuart understood what sort of house we wanted straightaway. He was great and came back with a design that really complemented the surroundings,” says Alec.

By now the planners had indicated applying for the buildings’ change of use was likely to be acceptable, as was making the alterations to convert them into a home. However there were conditions attached, including restrictions to the roof height on the cart shed and tack room, and having to remain within the original footprint.

“In the end they let us have 10% more space – we were allowed to incorporate the old stable courtyard into the house, and build a small side extension,” says Alec.

The couple briefed Stuart to come up with a design that would reduce their energy bills with solar panels and rainwater harvesting. They wanted the house to respect the original form of the buildings with plenty of light, a study and an open-plan living space for entertaining.

Although there was a restriction on the roof height, Stuart was allowed to change its pitch to create cathedral ceilings within what was previously unused space. “We weren’t keen on dormer windows so Stuart suggested we should build the roof right down to the eaves,” says Alec. “This has given us fantastic vaulted ceilings and a mezzanine level for the study.”

The plans were submitted in August 2009 but it took seven months before a decision was made. “We got a call on Christmas Eve to say the paperwork was ready, but they had forgotten to ask us to do a bat survey,” says Alec. “Fortunately that came back all clear, although our plans still weren’t approved until March 2010.”

By now Alec and Inese had chosen a local family firm of builders that had a good reputation in the area and had previously completed a smaller project for one of Alec’s relatives. They asked the company to begin the demolition and excavation of the buildings in readiness for new foundations, and also re-construct the garage in stone to match the rest of their new home. Thinking ahead was a prudent decision as it became a useful workshop and store for fittings and materials.

Almost as soon as work started on site in spring 2010, there seemed to be endless weeks of rain that hampered the builders doing the groundworks. The main problem with the structure was the lack of foundations. The workmen had to dig down to underpin the walls and also get the roof height they needed. Overall the ground floor and surrounding external area was reduced by about 300mm. Then landscaping work needed to be done to integrate the building back to its surroundings. Although the stable block was largely intact – apart from needing a new roof – the cart shed and tack room had to be rebuilt. The local whinstone walls were carefully dismantled, and a timber frame was constructed inside both here and also the stable block, to carry the load of the new house.

Specialist stonemasons were then brought in to do the cladding with the recycled original stone, in a style that matched the stable block. “Apparently the material is really hard and difficult to work with, so it cost us a small fortune because the workmen were here for about a year,” says Alec. “But you get what you pay for as they did a beautiful job.”

About six months into the project the couple experienced a major setback when the builder ran into some personal problems. He became so unreliable that the site almost ground to a halt for three months. “I was grinding my teeth because I was so annoyed,” says Inese. “But I didn’t want to tear strips off him as he was going through a difficult time.”

The work became disorganised and there were delays as materials didn’t arrive on time. Alec did what he could to manage the site, but it meant taking time out from his own business 60 miles away.

“It was very awkward as we were right in the middle of the project and we didn’t feel it was worth hiring another builder to finish the work that had been started,” says Alec. “Despite the problems we were happy with the quality of the workmanship so we just stuck it out.”

The project gradually picked up pace again and was finished in August 2011. Inese says it’s fantastic to have the house they want but they won’t be doing another project like this again in a hurry.

“Despite the problems we’ve experienced, we’re really pleased with the outcome,” she says. “Our home is very easy to live in and the amount of sunshine that flows through the rooflights is incredible.” 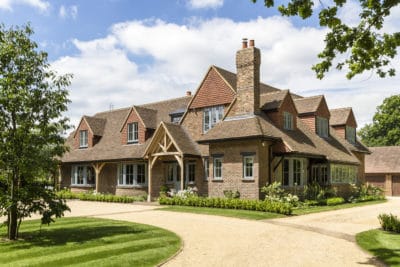 Preserving History in The Home
Federation of Master Builders
Our sponsors