Heather and Pete Dyson fell in love with a 1930s two bed semi-detached house with ample character, including original period features such as tiled fireplaces, oak floorboards and interesting alcoves. It did not, however, offer the level of space they were looking for.

Having been previously owned by a woman who had lived there for 60 years, it was rather on the dated side. Key areas that needed addressing were the small kitchen, the need for more bedrooms and bathrooms and a renovation that was more suited for modern living.

“We knew before buying that this was an extension project,” says Heather. “The kitchen was less than 5m2 – in fact, the whole house was small.” The couple engaged an architect, who drew up plans for a wrap-around 69m2 two-storey extension that would almost double the size of the property and make it fit for the Dysons’ lifestyle.

Happy with the scheme, the designs were submitted to the council for permission; however, this process didn’t go smoothly. The Dysons’ neighbours were concerned that the design would block their natural light, which delayed the process. “We ended up amending the plans, but we’re actually glad we did because it meant a better layout,” says Heather.

Heather and Pete decided to go with a builder that could take on the role of project manager and coordinate everything on their behalf, including employing sub-contractors. They chose local firm Coopers Design and Build, which is headed up by David Cooper, who spent 10 years working as a sergeant in the Royal Electrical and Mechanical Engineers Corp. The couple were impressed with David’s ideas, as Heather says: “He had a lot of useful
tips, such as how to improve the layout and which flooring to go for.”

“I did tweak the architects’ plans a bit,” says David. “I removed an unnecessary window in the kitchen and took down a wall between there and the snug, as well as adding some character to what would have been just a line of kitchen units. As for the main bedroom, I moved the position of the ensuite to where an old unwanted cupboard was taking up space.”

The project involved doubling the size of the house by extending 2.7m deep and 2.9m to the side to include a large kitchen-diner, separate utility and cosy snug. Repositioning the staircase and the front door (which was originally at the side of the property) allowed space for a bigger hallway, a new porch and a cloakroom. Upstairs, there was now space not only for a master bedroom and ensuite, but also another guest bedroom and larger family bathroom. The Dysons now have a fantastic family kitchen, complete with a table and collage of memories

The couple kept the original fireplace in the front living room, but the one in the dining room was removed and the mantle replaced with an oak beam lintel, which draws the eye and creates a useful shelf. This rooms opens onto the new snug, which features rooflights the help to filter light back into the original part of the building, while French doors connect to the garden.

The L-shaped culinary zone is located in the extended section. Heather approached Sigma 3 Kitchens in Esher because they manufacture and retail machine-cut units in the UK. “We think they offer excellent value for money,” says Heather. They worked with designer Oliver Howard to come up with a bespoke scheme.

The Dysons were keen on a dark blue design they had seen which they felt was striking and unusual. However, Oliver felt that such a dark shade might be too strong. “I agreed with him once I discovered that to get the right colour meant hand painting each unit at vast expense,” says Heather. The dining room leads through to an additional living space

“I liked that he grasped the kind of look we wanted and I didn’t get the impression they were just trying to spend all our money. In the end we chose Masterclass units and had the Shaker-style cabinetry in dove-grey, with duck egg blue for the island and Bianco Maple silestone worktops.”

Although Heather had wanted a wooden floor, they decided to fit tiling that resembles wood as it worked better with their underfloor heating, is easily washable and long lasting. Another unusual feature is an oak butchers block at the end of the kitchen island. “Pete is a keen shot and often brings back game to cook,” says Heather. “The block is designed so the end-grain of the wood forms the surface which makes it very tough and won’t show any knife cuts.”

The new family bathroom presented an awkward L-shape, with the slope of the roof forming part of the ceiling. Johanna Flores, a designer at Bathroom Eleven, was on hand to assist with the layout and was able to create a high end walk-in shower in just 1m2 of space. “My husband Pete likes the functional look whereas I like things to be elegant, so we had to compromise,” says Heather.

“We chose a simple basin with a beautiful bowl shape, while the loo, generally not a thing of beauty, is also in a simple design and discreetly tucked away in a corner.” 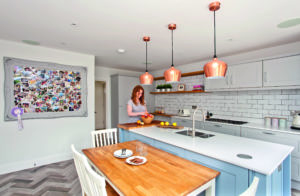 Having been inspired by a patchwork of colourful tiles in spot areas they’d seen on Pinterest, they chose antique-style blue-grey patterned tiles – Park Antique Silver wall and floor tiles from Porcelanosa – for the bath panel and within the shower area. Wood-effect porcelain tiles are on the floor.

“They were exactly what we wanted to add some character to what could have been a bland bathroom,” says Heather. “Then to help the light dance round the room, David has put in three mirrors in a row above the basin. To avoid being cracked from the heat of the adjacent wall lights he attached the lamps, which he’d sourced for us online, onto blocks of wood on either side to lift them out of the way.”

The main building work took 11 months, and for the exception of two months, the Dysons lived in the property while the renovation and extension was being built. However, there were a lot of little bits left unfinished, like the driveway, guttering and rendering of the porch. It wasn’t until August 2018 that Heather and Pete had a fully completed renovation.

However, they now have a property twice the size of the one they bought and full of modern features, alongside characterful details that hint back to the property’s roots. Since completing the project, two have become three, and Heather and Pete have welcomed a little boy called Rowan.

“We’re really glad that we built the extension when we did,” says Pete, as they now benefit from the ideal home for their growing family.