Toby and Nina Harris bought a Grade II* listed farmhouse and 20 acres of land near Glastonbury two decades ago.

Toby is a builder who specialises in restoring old houses, and this was one of his projects. “It had a stream running right through it when we bought it,” says Nina. “The star listing comes from the amazing elm cruck roof, which, along with the farmhouse dates back in part to the Tudor period. We know it existed around the time of the enclosures.”

This historical incident saw small landholdings consolidated into larger farms, which were allocated to those deemed to have rights to it. “In those days there was a path dividing our farm from another,” says Toby. “It’s now a road. But the farm on the other side of the track kept all the land on that side, while our farm got all the land on this side.”

Flanking one side of the couple’s farmyard was a double-height barn with old stables on the right and a cowstall on the left. The structures were about 150 years old, built from the local blue lias, and in very poor condition.

“We used to store hay in the barn, with animals in one part; the right side was for horses and the other for storage. But after several years the roofs were caving in and the buildings were in disrepair,” says Toby.

The couple decided that the time had come for Nina’s mother, Shirley Borokhov, an artist and sculptor, to live much closer to them. Plus, they knew the barns could make a suitable home if converted. They asked their neighbours Geoff and Liz Payne for some advice, as Geoff is a semi-retired building designer and Liz a town planning officer. They had previously worked with Toby on a number of different projects so trusted his expert opinion.

“The buildings are listed Grade II* because of they fall within the curtilage of the farmhouse,” says Toby. “It took about six months to get consent and listed building permission.” The planning officer for Mendip District Council initially wanted to turn down the idea, saying the conversion would be too near the animals that are kept in the rescue centre that Nina runs. They house horses, cows, sheep, pigs and goats.

“They’re all rescued,” says Toby. “For instance, we have two Jersey cows that couldn’t get in calf, so were destined to be turned into meat. But the owner gave them to us instead. We don’t milk or farm any of the animals. Instead the livestock acts as therapy for children who come to visit – young offenders and those with autism, for example, and youngsters wanting to work with animals in the future.”

Despite the planning officer’s objections, the listed buildings officer insisted the Harrises should be allowed to restore the barns before it was too late to save them. Geoff enjoyed working on the scheme with his neighbours.

“Nina and Toby had many great ideas and we sorted out which ones were feasible as the planning officer was quite stringent as to what was allowed,” he says.

“It was a joint effort between the four of us. We found some old photos, dating from around the 1960s, showing how the structures looked when the property was a working farm. They helped us to prove that the stables had been taller in the past, so we knew we would be allowed to build up the walls and raise the roof line on that side.”

Development began in the autumn of 2015 and took approximately 30 months – Toby’s team worked on it slowly in between other projects. “It was a lengthy process and a difficult build,” he says.“It involved a great deal of stone and steelwork.”

One problem was that the ground behind the barn was a good 2m higher than the floor level inside. We had to use a massive digger to remove 3,000 tonnes of soil. It took a week to clear, and then I paid a farmer friend to take it off site. It took six tractors and trailers to lug it over to his farm, where he used it to create a Motocross track for his kids.” The roofs of the two buildings had originally been tiled with clay, but by the time Geoff and Liz came to see them, this had long vanished and iron sheeting stood in its place. Only the barn had its original clay tiles, about half of which could be salvaged.

Having restored the cowstall and stables the team used Xtratherm 150mm PUR board insulation throughout for all walls, roofing and flooring. The front of the main barn was leaning badly so needed a goalpost of rolled steel joists be held together.

After being treated for woodworm, the original rafters were reinstated along with some reclaimed elm purlins, more for cosmetic reasons than structural, necessitating more steel beams. Then all the roofing was replaced using a mixture of original and reclaimed double Roman clay tiles, bought from a reclamation yard.

“The floors were a mishmash of old flagstones, earth and concrete,” says Toby. “We dug them up, concreted and insulated, installed underfloor heating throughout the ground level and then screeded before laying the finishes.”

The former cow stall has now been converted into a kitchen with a dining area and drawing room, which Shirley has turned into a stunning art gallery.

The original flagstones from the barn were salvaged to refloor the kitchen, while the rest of the flooring throughout is made up of old scaffolding planks. “These came pre-treated, some with limewash and some stained,” says Toby.

The main barn contains the formal dining room, which features some beautiful flat-topped cobblestones. Toby found these under a car park when he was demolishing a pub, and they were laid in their natural reclaimed condition. There is a mezzanine sitting area and study/gallery above.

As for the former stables, these now comprise two ensuites on the ground floor and the main bedroom above. Toby’s team also installed an air source heat pump (ASHP) and solar panels on a nearby prefab building. “We don’t have a water harvester, instead, rain from the roof is diverted into the pond with an overflow to the ditch.” The completed conversion now covers 279m2. It features double glazed doors and windows, handmade using Accoya – a pressure-treated timber that’s guaranteed not to warp and to last for 50 years. The team also built elegant brick arches above all the windows to match those of another stone outbuilding.

“We persuaded the listings officer they would be appropriate,” says Toby. Inside, the house is finished to perfection, boasting heaps of character. The walls and flooring feature a neutral palette, annotated by pops of colour in the furniture and textiles. Rising from the formal dining room is a reclaimed elm staircase from Glastonbury Reclamation, which was modified to fit on site, incorporating reclaimed elm from another staircase.

“Nina found an illustration of a balustrade that she particularly liked, and we were able to recreate that,” says Geoff. Shirley’s new Shaker-style kitchen was made by Crest Timber Products of Bristol. The worktops are of Corian and the appliances are Bosch and Neff. There’s an Everhot electric range cooker, which just plugs in. All of the bathrooms were equipped with furniture from Wollens builders’ merchants, and the decoration was carried out by locals – brothers Keiran and Martin Monaghan of Monaghan Decorators.

“We have christened my mother’s home the Peacock barn,” says Nina. “Peacocks roosted in the eaves for many years. My mother herself is a very colourful character and so, of course, is her art!” 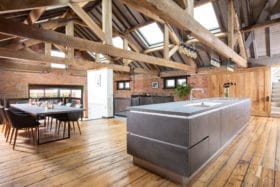 An Industrial Garage Conversion
by Heather Dixon
Next Article