Simon Baker gained his degree at the Royal College of Music and worked for several years as a professional pianist – before going on to make a big career switch to become a London policeman.

In order to cope with the stresses of his new job, he soon realised a complete overhaul was required to attain the right work/life balance. Simon had already remodelled a Victorian semi-detached property, which ignited his appetite to take on an even bigger project.

“I then bought a flat in Stockwell in early 2012 when prices were still a bit depressed,” he says. “Selling that provided capital for a more ambitious undertaking.”

Planning consent in a national park

Simon’s research turned up an old barn that was up for auction in the heart of Snowdonia, and the agents said the vendor might be open to an offer. Since the location was promising, Simon went to take a look.

“I fell in love with it on the spot,” he says. “The place ticked all my boxes, though it had no formal permission to convert and was in a National Park with restrictive covenants.”

Plus, dual planning procedures with both the Snowdonia National Park and the National Trust (NT) were in effect. This was due to covenants dating back to when the latter organisation had owned the land. Slate is a major characteristic of the conversion, featuring on the roof and south elevation. In addition, a picket fence has been formed with slate offcuts

“Out of the two, the National Parks Authority was far easier to deal with,” says Simon. “Their people were responsive and helpful.” Simon found the National Trust application process rather opaque. “You approach the local branch and they advise. Next, they submit to their National Central Architecture Panel in London – and you’re not allowed to attend the meeting,” he says.

“There’s little awareness about how to deal with the Trust and few solicitors or architects seem to have any experience with them. You ask them for guidance and a summary of their requirements – but in vain! It’s tricky, and without a right of appeal unless you go through the legal system.”

Simon researched the valley and the history of its buildings to back up his scheme. “I supported everything in my proposal with photographs I took of other barns in the area,” he says.

“For example, I’d capture images of an agricultural property with the same sort of rooflights as I wanted. Apart from overhead glazing, the structure had plenty of door and window openings, so I didn’t need to insert any additional apertures.” Simon was keen to demonstrate he could achieve a home with plenty of views and lots of natural light, without punching extra holes in the barn. “I showed that I could maintain
the character of the building,” he says.

“Welsh valleys are full of old abandoned agricultural properties that have little or no value to farmers. I was engaged in preserving one of these. Not only did I want to demonstrate that I was doing a light-touch restoration, but something that also respected the local vernacular.”

A basic rule for anyone planning this sort of project is to bring the neighbours on board, as well as the council, so Simon got in touch early on. “I wrote to people living nearby to assure them that I wasn’t turning the barn into a holiday let, but a home for myself, with no unwelcome changes.

I only had one set of objectors, who are now – funnily enough – among my best friends in the village.”

At an early stage, Simon engaged Hereford-based Communion Architects. “They’d done something like the curved staircase I had in mind and seemed competent,” he says. “I felt that, especially in dealing with the National Trust, I had to find good pros.”

In July 2015, all the required permissions finally came through. “The NT simply emailed my architect, with a couple of stipulations about rooflights,” says Simon, who was able to breathe a big sigh of relief.

At this point, Simon thought he’d easily be able to sell the project to builders, who he assumed would want to grab the opportunity.

It proved tricker in reality. “You have to get out there and convince contractors about your project’s feasibility and profitability,” he says. “You need to work hard at this in rural areas, since the trades are perhaps more accustomed to conventional schemes.” He visited the Natural Building Centre in Llanrwst, where he consulted Ned Sherriff. “I sought his advice about insulation, lime mortar, sustainability and using traditional materials,” says Simon. Ned recommended Gordon Jones for the role of main contractor.

“Gordon lives nearby so I called in to discuss my plans,” Simon explains. “We made no formal contract, but he’s well established and has a good reputation. Plus, he’s enormously experienced with this type of building. It worked out very well – Gordon and his son Dylan provided a service that exceeded my expectations.”

While Simon’s barn was of a good size, his experience of cramped flats had educated him in the value of maximising living space.

“I knew I’d want lots of bespoke interior work, and I needed someone who would be open to new ideas,” he says. “I found Windinghouse Interiors and quickly decided they were ideal for all the kitchen and cabinet work.” Simon introduced Ben Harrison from Windinghouse to Gordon, and the pair got on well. The bespoke kitchen fits neatly alongside the curved staircase. The recessed lighting is by John Cullen Lighting

“Personal relationships are so important when you’re employing people for your project,” he says. “It proved to be a happy site, with practically no arguments.”

Building work started in May 2016, and initial excavations were straightforward. “We were fortunate to have an almost unlimited amount of stone on site. We dug this out of the ground on the north side of the barn.

Together with some oak lintels within the original roof structure, these were the main materials used,” says Simon.

The majority of the crew working on the conversion were local, or at least from within Wales. This was important to Simon, who wanted to fit into the community. Switchable glass by Intelligent Glass has been applied to the steps above the bathroom, which can change between clear and opaque. This allows privacy when Simon has guests but enables light inside

“Word gets around about you, what you’re doing and how you conduct yourself, so everyone knows who you are by the time you meet them,” he says. “I didn’t want to be just another newcomer with no stake in the locality.”

One of the biggest challenges with this sort of conversion project is making the place practical and affordable to heat. Getting the structure up to modern Building Regulations standards – without destroying the aesthetic – is another common obstacle.

As the plot doesn’t have mains gas, Simon looked at a range of alternative options to power the heating setup, including installing a biomass boiler. However, his architect suggested an air source heat pump (ASHP), which has proven to be the right choice. For Simon, it was important to employ systems that were efficient and environmentally friendly. “We were able to use sheep’s wool as the insulation for some of the walls and the roof,” he says.

The floor was a Ty-Mawr limecrete slab with Glapor insulation beneath, chosen because it’s more environmentally friendly than concrete. “Internally, we used a two-stage cork insulated lime plaster, which specialist Biagio Gargiulo finished beautifully,” he adds.

However, before the benefits of the highly protective thermal barrier could be felt, Simon had to wait for the building to dry out. “I noticed a big reduction in heating costs after the first year,” he says. “I now have the underfloor heating on at a low level all the time, but it’s a cosy house with affordable energy bills.”

Given the fact that Simon tackled such a radical renovation of a building many people would have deemed unsuitable, it’s unsurprising that he’s learnt a lot along the way.

“I picked up a huge amount of technical knowledge regarding the conversion of stone agricultural structures,” he says. “I also acquired plenty of know-how on the building business itself, as well as the intricacies of negotiating restrictive covenants with the National Trust.”

Simon also learnt a lot about what he calls the project pyramid. “The build phase of any scheme is really the final part of a huge preliminary process,” he says. “The whole journey to this stage took nearly five years of my life and is perhaps better described as an odyssey. But there really is something special about living in a house you have found, redesigned and rebuilt yourself.”

For Simon, the most rewarding moment arrived when he could finally move in.

“I get so much pleasure from being here and sharing the property with friends and family,” he says. “I also measure the success of the project in terms of how I’m still on great terms with the guys on the build team. I’d give them 10 out of 10 stars.”

Now the conversion is complete, Simon acknowledges that it would have probably been easier to demolish the original structure and start again from scratch. “But the end result is actually better than I’d anticipated. I hadn’t guessed just how good the mezzanine would be, how well it would work and how much I’d like the place,” he says.

“I love the outdoors, so life is good being here with the watercourses, mountains and changing weather. I drive the 40 minutes over to Llandudno Junction Station and then it’s a three-hour journey to London and work. I do my series of shifts, then hop onto the train again for a couple of days at home.”

Looking back on the project, there’s nothing Simon would change. He would, however, spend longer on the planning phase if he had his time again. But for now he’s content: “It’s far too early to think about doing another scheme. If I did, it would be something completely different; perhaps a new build by the coast rather than a conversion. It would have simpler lines and be very minimalist in style.”

For the time being, Simon has too much invested in his current home and the local area to think about moving again.

“It would be difficult to leave,” he says. “I’m still very much at the stage where I relish all I’ve learned from my journey. You may debit your bank account – but you definitely credit experience.” Charming and Unique Barn Conversion
by Victoria Jenkins
Next Article 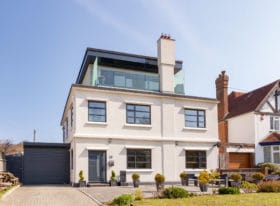