This remarkable low cost straw bale home is testament to what can be achieved with just £60k, a great eye for design and true self-build grit

Folk musician Damian Helliwell was brought up on the Isle of Eigg, which is owned by the eponymous Eigg Heritage Trust, a community organisation that oversees the island and ensures sustainability.

After living in Edinburgh for over a decade, Damian came across a once-in-a-lifetime opportunity from the trust, which was offering plots to ex-residents on a shared equity basis.

This meant that he didn’t have to pay for his site, as it remains in trust ownership, although any building on it would legally be his. This spurred his decision to return home and embark on a self-build journey.

Innovative in his approach to music, Damian applied this same spirit to his project and chose straw bale as the structural system, even though he’d never actually seen a home completed using this method.

In preparation for his project, he immersed himself in books and websites about straw bale and sustainable routes to housebuilding, although reading about the system was only ever going to take him so far.

Damian was very aware that the fabric of the building would need to be robust enough for island life. He knew he had to ensure that his house could withstand the horizontal rain and gale force winds typical of the area.

It would also need to resist the elements during construction, when it would be at its most vulnerable. This is because it is vital when building with straw to keep the material as dry as possible while the walls go up.

Damian was faced with two main challenges: he wanted to complete the house on an incredible budget of less than £60,000; and was determined to do almost all the work by himself – a desire that underpinned the affordability of the build.

However, the first step was to come up with an approved design and in true pioneering spirit, this was done without the assistance of an architect. He did however, get lots of advice, especially from straw bale builder Andrew Morrison, whose website StrawBale.com is a vital tool for anyone planning to create a home using this system.

With the drawings done, getting planning permission proved relatively straightforward. The trust was satisfied with the structural engineer’s report and were happy with the construction method, especially as it’s a system that is both sustainable and affordable, with a low environmental impact.

From his research, Damian learned that there are two principal methods of straw bale construction. One is a load bearing system where the compressed bales support the roof. The alternative is to build a timber frame and use the straw as infill. But Damian felt that neither of these was quite right for him, so he opted for a hybrid system.

“I erected a freestanding post-and-beam frame, and then went on to complete the roof. From this point the wall could be infilled, with the bales stacked in the same way as they would for a conventional load-bearing straw bale construction. Once compressed they contributed to the structural support offered by the frame, helping to share the weight of the roof and any imposed loads, such as snow,” he explains.

The build took over three years with Damian working alone and living in a caravan on site for most of the time. Although progress was slow, it mainly went smoothly. However, it wasn’t all easy, as going solo meant he had to come up with new ways of working to complete jobs that would normally require several people. 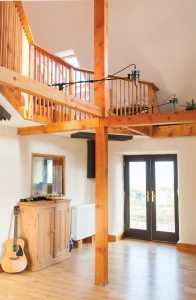 There was one particularly heart-racing moment (not to be tried at home) when it came to putting the three-piece ridge beam in place. Damian had created a block and tackle pulley system, and was inching the timber into place using his car.

“As I was doing this by myself I had to repeatedly move the car slightly, get out, climb up to the second storey to check the progress and then repeat the whole thing, until finally the beams were in the right place,” he says. “It was a lengthy process, and it could all have gone wrong, but my calculations were spot on and the timbers slotted into place, which was a huge relief.”

With the timber frame in position, Damian again came up with a practical solution to his build, and wrapped the entire structure in breathable plastic sheeting to create a watertight envelope. This meant that he could infill the frame with the bales while ensuring they remained dry throughout the next stage of construction – crucial in an area with notoriously changeable weather.

The next stage was coating the surface with lime plaster and render, a process that strengthens them while maintaining their breathability. Typical of his DIY approach, he undertook the work himself, although he deviated from convention in the type of mesh he used on the interior of the build; a decision that he came to regret.

“I decided to use plastic rather than metal mesh, which turned out to be a big mistake,” says Damian. “Although it’s a bit more expensive, metal is much simpler to work with as the plastic just pulls taut and you can’t shape it easily. Metal, however, can be formed around corners and used to create sills and details, making the job of plastering less challenging.”

Externally, the house is clad in untreated cedar which, thanks to the weather, has quickly faded to its natural silvery grey, helping the building blend in with the muted colours of the island.

Inside, the true beauty of the house is revealed in its exposed timber posts and beams, with the warm tones of the Douglas fir complementing the oak floor. The posts define the look of the open- plan kitchen and dining area. This leads on to the master bedroom, bathroom and a second bedroom, which are also on the ground floor. But it is the double-height studio that is the crowning glory of the house, with its tall window that frames a view of An Sgurr, Eigg’s highest peak.

After immersing himself in his building project for up to 16 hours a day, Damian is now enjoying life in his innovative home, where he now lives with his partner and fellow musician Jenny. “It’s such an easy building to live in,” he says, “and we have no intention of ever moving away from the island again.” A Modern Take On Oak Frame
by Richard Webber
Next Article