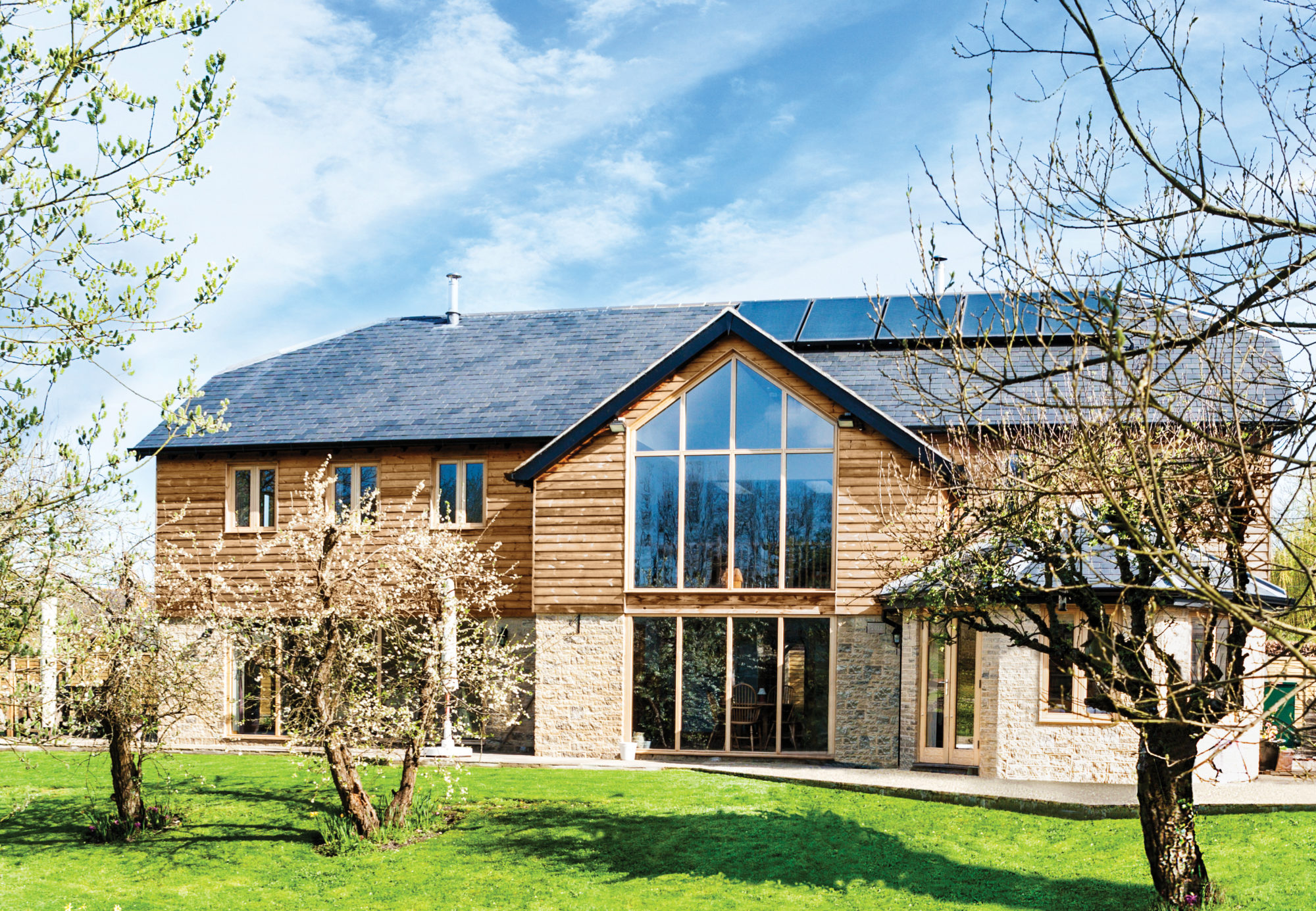 The Abbotts found an idyllic plot to create their barn-style home, which was made with a quick-to-construct modern build system

Vincie and Bernard James – BJ – Abbott were fed up with residing in the crowded south east and longed for a change of pace. “We married in 1995, when both of us were living in Surrey,” says Vincie. “We’d extended our house significantly but had it in mind to find a plot one day, and build something for ourselves.

“We planned to move in with my mother in Cheltenham while we looked for a house, perhaps in north Wiltshire,” she continues. “We came across a house in the Wylye Valley, which was on a good-sized plot, and we were quite interested in it. In the end, though, we felt it wasn’t quite to our tastes, but the location was great.” The couple decided to rent a home in the village and start seriously looking for a self-build opportunity in the area.

Eventually, through local word of mouth, they heard about a plot with a bungalow for sale. The owner had sadly passed away and the family had planned to keep it as a rental property, until they realised how much time and money they’d need to invest in updating and maintaining it. “We haggled a bit before settling on what we felt was a reasonable price, £335,000,” says Vincie.

Prior to the purchase going through, the couple had tried to contact their local planning department to discuss their wishes for a self-build on the site. “They wanted to see a preliminary design, but they behaved very oddly – they declined to meet us face-to-face,” says BJ.

“They’d only speak to us on the phone, and told us to send them details. And there was other strange behaviour: we tried to see the planning details for a neighbouring property, but these apparently couldn’t be found – which seemed unlikely. Our building control officer tried to uncover this, but couldn’t, and he described it as untypical and puzzling.”

The pair needed those details since they wanted to build a two-storey home rather than a bungalow, and the neighbours were concerned that a structure somewhat taller than the pre-existing house would shadow their property.

“We had a roof study done, to see how high we could go; the neighbours were concerned about loss of light,” says BJ. “This was resolved when the survey proved this would not be an issue. We also cooperated with them over a new partition fence and they appreciated our efforts.”

In addition to the issues with the planners, Vincie and BJ came across a series of difficulties with finding the right designer.

“We went through several architects,” says BJ. “One came round for a look, chatted to us over lunch, then billed us £600 for their time! Another sketched out something that looked like a gothic monstrosity. The next, who never even came on site, turned the house around by 90° because he told us we couldn’t have the front door at the side! Finally we found Jonathan Nuth from E10 Architects who helped us along the way.” The couple learned a great deal about the process of creating a bespoke home from the National Self-Build & Renovation Centre in Swindon. It was there that they discovered thin-joint masonry, and decided this was the perfect match for their development.

“We went for a mortarless system because it’s fast to erect and very robust,” says BJ. “Every third row there’s a steel reinforcement, and because it uses epoxy resin for the joins it dries very quickly.

Building with thin-joint does require some special skills – a number of local brickies that the Abbotts contacted weren’t interested in familiarising themselves with the construction system. “Fortunately we found Barrie Knapp who was trained in this type of masonry; we hired him as a builder and he took on the project management, too,” says BJ. “In fact, he also did all our procurement and looked after all the labour. I did the technical stuff though, including lighting, plumbing and steels.”

Work commenced in August 2011 with demolition of the existing bungalow. “A lot of the materials from the bungalow were recycled in the village. About 200 tonnes of rubble were used for the main road, roof tiles were applied on a nearby cottage – we only sent about six or seven loads to the tip!”

The build itself went well on the whole, and speedily, but it wasn’t entirely without problems: “One guy we had doing the epoxy-glued oak flooring had begged for the job and said he’d learn how to do it properly, but he messed it up and used all the material too soon, with lots of waste. He used so much epoxy that we’ll never be able to lift and replace it! We should have been warned off by his practice of sawing our expensive oak flooring across a bucket,” says BJ. “And our ridge tiles came off in a storm because they hadn’t been fixed properly – the roofer simply hadn’t followed NHBC guidelines.”

The couple wanted their home to be as efficient as possible, and the house has been highly insulated throughout with Celotex. “We also wanted it to have the right aspects – such as the potential to build with a bedroom facing the sunrise, entertainment space to the south west, and lots of light and spacious rooms,” says Vincie.

“On a sunny day, the 13.2m2 of solar thermal panels on the roof gets the thermal store up to about 80°C. We use this to supply our hot water and underfloor heating.” In addition to an LPG back-up boiler, the couple has invested in a woodburning stove and a mechanical ventilation with heat recovery (MVHR) system.

Vincie and BJ still have a few finishing touches to complete and want to do some extra work on the landscaping. However, they are delighted with what they have achieved so far. “We have one of the best locations in the village, on the banks of the brook. This is the only watercourse in the area, and while having a chalk stream running so close to the property is charming, it’s not without its difficulties,” says Vincie.

“The site floods, though not into the house – the water gets half way up the lawn, then runs off the other bank which is lower. But we can live with that. When we saw the original old bungalow, we knew it was the blank canvas we’d been looking for. There’s nothing we would change.”