The breathtaking location of the Lyndon family’s new home demanded a design to match. As a former garden and green space at the entrance to Portwrinkle village, the couple felt that they wanted to maintain some of its original character and incorporate it into their plans. Their sought to create a four bedroom house with each of the rooms benefiting from views of the sea, while not impeding the rural nature of the site.

The new home was designed to be inconspicuous at first glance. To achieve this, the building would need to be sunk into the landscape and take advantage of the topography by using split levels to create rooms that look out over an open plan living area.

As an Open Area of Local Significance (OALS) the site was full of unusual requirements, which put many people off pursuing an application. As a very visible site it was debatable whether it should be developed at all. Ian Armstrong of Arco 2 Architecture rose to the challenge and after engaging with the parish council on a number of occasions was able to gain the support of both the locals and the planning officer.

Throughout the planning and design process many elements of the house had to be considered in order to blend into it surroundings. The low height of the building was vital to preserving the views of passing pedestrians and a local listed hotel. It’s nestled into the gradient of the land which, combined with a sedum roof, makes the dwelling near invisible to passers-by.

The team built a pavement around the site to enable safe public access to the beach path. This was one of the first jobs to be completed in an attempt to prove the good intentions of the project. These efforts paid off as they received many compliments throughout the build and no complaints. In fact, as the building grew, so did the enthusiasm of the local community, with many people monitoring the scheme with avid interest.

The underground nature of the house, alongside its green roof, has led to greatly reduced heat loss. Furthermore, the structure is very thermally efficient and incorporates high levels of insulation, thanks to its fabric first approach. The airtight methods used consist of only natural materials and allow moisture to breathe naturally through the dwelling, reducing humidity and improving air quality. The walls and roof are packed with reclaimed sheep wool – a by-product from a local rug-making tannery.

For many in the community the Lyndons’ new home is a gateway to Portwrinkle to be proud of and Ian found it his most positive build experience within a community. Not only does the house remain hidden within its surroundings but it also provides a beautifully light and open interior. This creates a sense of being protected and comfortable, while retaining a panoramic outlook.

“Working with ARCO2 has been a delightful experience –one I would without hesitation recommend for anyone setting out on creating a truly unique home,” says Alisha Lyndon. “The design blends beautifully into the landscape and is packed with considered design elements. Ian has an amazing vision, one that goes beyond the basics of good architecture – he has created a delightful home that not only looks good but is a joy to live in.”

Striking Timber Frame Build
by Build It
Next Article Contemporary Coastal Home on a Cliff Edge
by Build It 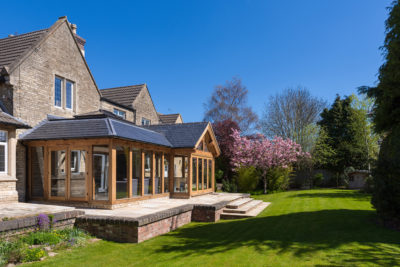