Light, space and tranquillity were high on Miranda Tufnell’s wishlist when she converted a beautiful barn in Northumberland

On a windswept hillside in the middle of an area of outstanding natural beauty stands a small rectangular barn. From the outside, it’s just like hundreds of other agricultural buildings dotted across the Northumbrian countryside. Inside, it’s a very different story. Within these walls, Miranda Tufnell finds a sense of stillness and containment.

Floor-to-ceiling expanses of triple glazing protect her from the elements, while thick layers of insulation, a heat pump and a highly efficient woodburner keep the dwelling warm in the harshest of winters.

This beautifully simple home was little more than a ruin in the wilderness when Miranda first clapped eyes on it in 2017. At that point it belonged to local builder Stephen Gebbels, who had purchased the property and an adjacent building at auction back in 2007.

It came with planning permission to convert into a three-bedroom detached house. However, when Miranda met Stephen by chance and then went to see the old barn, she knew within five minutes that she wanted to put down some roots there.

“It was in a completely raw state and looked much smaller and darker than it does now,” says Miranda. “But the sense of peace and tranquillity inside was extraordinary.” There was just one snag – Miranda had no intention of turning it into a three-bedroom home. The cosy kitchen-dining area with its bespoke cabinetry, made locally

“I didn’t want to live in a house with lots of rooms,” she says. “I wanted bright, open spaces, maintaining the integrity of the barn wherever possible.” She was also keen to work with eco architect Andrew Yeats, whose work she had always admired.

“I first met him years ago and promised myself that if I ever I had chance to build or renovate my own home, he would be the one I would like to design it. He understands the concept of free-flowing spaces and lots of natural light,” she says. “His ethos runs parallel with my work as a dancer, which also focuses on space and movement.”

Stephen agreed to sell the barn to Miranda in its original state and Miranda asked him to do the renovation. “As the previous owner of the building, he had a knowledge and an empathy of the structure that was second to none,” says Miranda.

The picture window is triple glazed, for better performance on the house’s exposed site

“He instinctively knew how to maintain the original character and structure of the property, while turning it into a beautiful place to live.” Miranda’s instinct in hiring Stephen proved to be just as fortuitous. “The quality of his workmanship has been amazing and he was so easy to work with.”

With Andrew and Stephen on board, work began at the beginning of a long, cold winter. The project had to adhere to a proviso set by the local planners that new openings were restricted. Also that only original materials could be used to rebuild the exterior of the house. “The barn was built in two parts.

The older section, with the large window in the gable end, had to be demolished and reconstructed to make it stable,” says Stephen. “It had to be redeveloped exactly as before, using the original stone.”

The stone was comprehensively lime pointed. Next, the roof structure was insulated with 200mm PIR (polyisocyanurate) foam and rigid vapour board, which was meticulously taped along all the joins and edges to prevent any heat loss and create an airtight envelope. 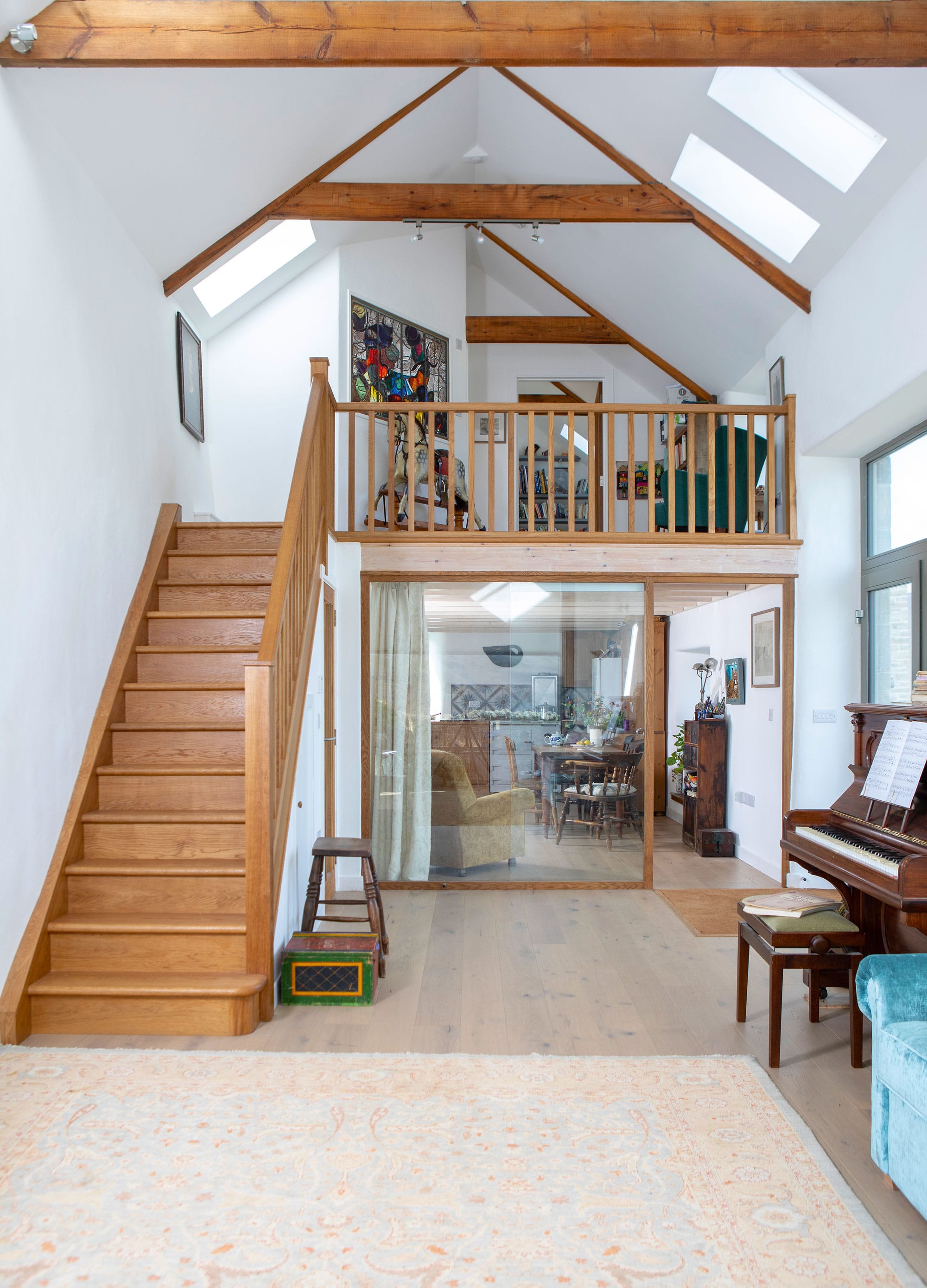 An oak staircase leads up to the galleried landing, while downstairs the internal glazing opens up the whole space

A service void was created under a layer of plasterboard and plaster. For added water and airtightness, a layer of Gutex wood fibre insulation was fitted directly beneath the roof tiles. “All the original slates were reused,” says Stephen.

“The roofer was working in temperatures as low as -13°C on a very exposed site, so it wasn’t the easiest of conditions. Winters up here can be incredibly harsh with howling gales and freezing temperatures, so the early part of the project had its own set of challenges.”

The solid stone walls of the barn did not lend themselves to dry lining, as the structure needed to be able to breathe to prevent dampness. Stephen used a 70mm-thick layer of eco-friendly Diathonite on the internal walls – see the Closer Look on page 47 for more information on how this product works.

“It is one of the first projects in the UK to have used this system and it’s been great,” says architect Andrew. Using this product also allowed the construction team to follow the natural contours and shapes of the inner walls without losing space to rigid lining boards.

When work first started on the conversion, the ground floor was covered in a layer of hardcore, which was dug out and taken off site. Next, a new surface of 200mm high density polystyrene and 100mm of concrete was laid with underfloor heating pipes. The structure was topped with an engineered wood floor. Miranda’s peaceful bedroom, which doubles up as a library for her books

The property already had mains electricity and drainage via a septic tank, which (along with the long access road) were installed by Stephen before Miranda bought the barn. The water comes from a natural spring that’s shared with five neighbouring houses. “I had the barn for 10 years before Miranda bought it,” says Stephen.

“I was doing up another one ready to sell it before I started work here, so Miranda was able to buy it in its original state and put her own stamp on it. In the intervening time, however, I had arranged for the services to be brought to site so it was all ready to go.”

Renewable heating and hot water are supplied via an Ecodan air source heat pump. The electricity to run the appliance comes from an array of solar photovoltaic panels installed on the roof of the barn. Miranda specified triple glazing for the large picture windows in order to keep out the chill of the wild Northumberland winters. Once the main structure of the barn had been fully renovated, Stephen built the first floor, which extends across half of the ground floor and creates a mezzanine level. This space is formed from thick timber beams resting on plates, which are bonded to the wall with stainless steel anchors.

Architect Andrew suggested oak stairs to lead up to the open gallery, oak flooring and a locally sourced handmade timber kitchen. These were chosen to complement the sustainable fabric of the building and create a calm, light-filled and uplifting interior. The resulting space is visually simple, yet highly considered, with everything made as ecologically sound and environmentally friendly as possible.

The internal stillness that has been established as a result is at odds with the ever-changing weather conditions outside, combing a sense of calm within a setting that brings Miranda ever closer to nature and the elements – on a clear day, she can see for miles.

“One of the main features of my home was always going to be an area that would work well as a dance and therapy studio,” she says. “As a teacher of the Alexander technique and cranio-sacral therapist I really wanted to include a bright, open space, so the area by the windows is ideal. It’s where my clients come to find a sense of peace.”

For Andrew, the chance to work with another creative person, and make something bespoke to suite her work and lifestyle, was equally rewarding. “It has been fantastic to work with Miranda, who is a dancer and artist, with a love of natural healthy materials and good design,” he says.

“The spatial concept developed around creating a double-height dance space with the exposed timber roof trusses. We also wanted to highlight the amazing panoramic view out of the gable window over the distant high moorland and hills beyond.”

As for Miranda, she is no stranger to the benefits of living in a stunning rural location. For 20 years she lived in the Eden Valley in Cumbria, on the edge of the Lake District, and before that she grew up in the highest house in Swaledale, Yorkshire, so the idea of living on a wild, open hillside wasn’t in the slightest bit daunting.

“For me this house represents an exciting new phase in my life,” she says. “When my sons came to visit they told me I was unsafe to drive as I was so giddy with happiness and joy about the place! I put it down to the sheer wonder of living in such a beautiful space at the heart of this extraordinary landscape.”