James Vickers and his wife Selina were no strangers to self-building when they took on this project. Having completed two previous houses, which stand side by side on the same road as their latest construction, they knew exactly what they wanted to achieve in terms of performance.

“I dislike the term eco – I feel it’s rather undefined, unquantified and frequently misused. However, this house really is green,” says James of his new four-bedroom family home. “We wanted to truly explore the best ways to create an efficient dwelling which would also be affordable to run.”

The couple’s first project was a barn conversion ahead of their wedding day. James, who now owns a construction company, used to work as a quantity surveyor and has always enjoyed hands-on building – as has Selina.

“We worked on renovating the barn when we were getting married,” says James. “Selina actually had to have her wedding dress altered twice because she grew broader across the shoulders from working so hard on site.”

They lived in their converted abode from 1992 until 1998, when they built a new house on a plot right next door. “At the time our home was absolutely cutting edge, but so much has changed in 16 years that we wanted to self-build again, this time using the latest technology,” says Selina.

Fortunately, the Vickers already owned the land – which had come with the original barn and had been used as a builder’s yard for James’ company. When the firm moved to commercial premises in a more suitable location, the couple worked on a design for a new build to replace the large tin shed already on the property.

“We felt that replacing this with a high-performance house of almost exactly the same size and shape would aid our planning application,” James explains. “This approach did limit the freedom to design what we wanted in terms of height, though. The new dwelling had to be one-and-a-half storeys with dormer windows – which we wouldn’t have built by choice as it’s more cost effective to construct two storeys.”

The planners indicated a strong preference for stone cladding for the parts of the house that are visible from the road, with the other walls finished in render. The resulting style is a contemporary take on traditional Manx architecture that incorporates large expanses
of glazing.

“Unfortunately, because we were replacing an existing building, the house faces east-west which isn’t brilliant for solar gain,” says James, who drew up the design himself. “The roof has 10 photovoltaic panels and three solar thermal units facing east. We have another three hot water panels to the west, too.” A big glazed gable faces south and allows light to flood into the master bedroom on the upper level and a sun lounge on the ground floor. Beside this leisure area is a spacious sitting room, which opens through double doors into a separate dining zone. A cleverly designed study has also been incorporated, which can be hidden away behind sliding pocket doors when not in use.

A further set of double doors opens into the kitchen-dining-living room, which runs across the full width of the house and connects to the garden through a glazed portal. There’s also a closed off utility, pantry and dedicated log store to help keep the room uncluttered.

A sweeping staircase rises up from the double height hallway and splits into two galleried landings, leading to bedrooms and baths on the first floor. All four rooms are ensuite, and the master benefits from dressing areas positioned to either side of the vaulted space.

“We wanted to hide this behind pocket doors to keep the main bedroom tidy,” says James. Bedroom two also features a walk-in wardrobe and is occupied by the couple’s daughter Beth, 22, and her partner John. Their other daughter, Emma (18), uses bedroom three when she returns home from university, while the fourth is reserved for guests. This storey also benefits from a laundry area.

Planning permission was granted upon submitting the first application, and the Vickers remained living in their previous home, next door, during the 12 months it took to finish the project – securing a self-build mortgage to fund the scheme.

“We could have built faster, but had other work on the go at the same time,” says James, who acted as project manager, employing trades from his own construction company and tackling some of the jobs on a DIY basis.

After the site was cleared, the existing raft foundations for the tin shed were able to be reused. “It had originally cost us £30,000, and we sold it on for £15,000,” says James. “We had a three-phase electrical supply and mains water to the old industrial building, so services were already in place.” 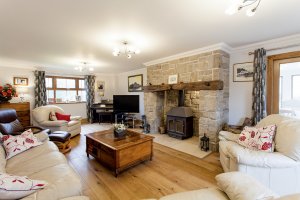 The former builder’s yard is now a paved courtyard and a number of trees – such as oaks, willows and chestnuts – have been planted on the site. Many of these were propagated from seed by the couple. The walls were build up on traditional masonry with 100mm of insulation in the cavity.

“Everything was carefully sealed to create an airtight structure,” says James. “We bolted all the joists onto bearers rather than building them into walls, and the traditional cut roof has 200mm of insulation, with every joint taped and sealed.”

The front facade and gable end have been finished in natural stone cladding, which is just 30mm deep but gives the appearance of full-thickness stonework once completed. The Vickers chose this option because of restrictions to the home’s footprint, which needed to be the size of the industrial shed that had previously stood on the site. Solid stone walling would have reduced valuable internal space.

The roof construction was carefully timed to happen during the International Isle of Man TT race, which is a building trade holiday, for James to be able to undertake a great deal of the work himself.

“The Isle of Man is classed as experiencing severe exposure, and we get incredible driving rain, so if a house isn’t built well then water will get in,” says James. “You have to plan ahead when working on the island, and you need to take into account that delivery of materials such as windows and doors can be delayed by at least a week.”

James and Selina decided to install wood-effect PVCu windows with energy-efficient triple glazing. “We didn’t pay the premium associated with certified Passivhaus products, but we used all of the ideas behind this building standard to ensure our home would be ultra-sustainable,” says James.

Underfloor heating has been installed throughout, and can be controlled remotely from a tablet or phone. This is fed from a thermal store – which also provides hot water – but is only ever needed for a few weeks every year during the coldest months.

Fitting this required thorough research by the couple. “Having such a big store means that the solar thermal panels on the roof work really effectively, even on a cloudy day,” says James.

Positioning the laundry room on the first floor has proved to be a great success for the family. The high ceiling enabled hanging rails to be installed on pulleys, so that clothes coming out of the machine never need to be dried outside.

“We have a mechanical ventilation and heat recovery (MVHR) system, and our washing dries in just a few hours,” says Selina. “There’s minimal ironing, too, which is a real bonus. It really makes no sense to drag all the wet clothes downstairs to dry outside only to have to bring it back up to the rooms again.”

The couple decided to use the same 30mm-thick stone cladding from the house’s exterior to create feature walls and fireplaces for two woodburning stoves in the home. The beam set into the sitting room fireplace is thought to be at least 800 years old, and it was reclaimed from a medieval castle on the Isle of Man.

“I’ve had that particular piece of timber in storage drying out for nearly 20 years,” says James, who also salvaged roof timber from an old church, which he plans to make into bookcases later on.

Choosing the kitchen proved more of a challenge for the couple than they’d encountered with their previous builds.

“It was quite difficult at first, because in our former house we had installed very traditional reclaimed pine cupboards, and now we felt out of our comfort zone shopping for a contemporary design,” says Selina. “Fitting silver-grey cabinets was a big decision. I kept worrying that we’d done the wrong thing, but now we love it. It’s so easy to clean.”

The pair were unable to agree on which worktops to go for, with Selina preferring Corian and James favouring black granite. Lucklily, a compromise was reached, with black granite used on the kitchen island and contrasting white Corian around the perimeter.

Building three homes side by side means that the Vickers only ever moved house with a wheelbarrow. “Each time we’ve built we’ve improved the performance and lowered our bills,” says James. “This place is double the size of our last, but the cost of heating the house is just a quarter of what we were spending before.”

The couple agree that they wouldn’t rule out doing it all again – and of course the next house they design would have to be even more energy efficient than the previous ones. As technology keeps improving, the pair are keen to explore the possibilities of green living. “The next target will be energy neutral,” says James.