How to Get Planning Permission for Conversion Projects

For those wanting to create a new home in the countryside, converting an existing building has long been an attractive option.

This approach can not only get you around restrictive planning policies that otherwise prevent new homes in rural locations, but also potentially enable you to build your way to a house packed with character and kerb appeal.

So, what sorts of opportunities are out there, and what do the planners allow these days?

Many of you are likely picturing a barn conversion, probably in the form of a traditional farm building. Old storage barns, granaries, dairies, byres and oasts can all lend themselves to transformation into attractive homes – as do Victorian-era equestrian structures.

There are, however, plenty of other opportunities out there. Many modern agricultural buildings are suitable for conversion, for example, and often enable a highly contemporary architectural approach.

Other types of structures that might offer potential include equestrian buildings; business, workshop and industrial premises; chapels; schools; pumping stations… the list goes on.

In fact, almost any type of building in the countryside, of a suitable scale, might be capable of conversion into a comfortable, unique contemporary home.

All types of conversion technically require planning – but some enjoy the benefit of permitted development (PD) rights. This enables certain types of project to go ahead without the need for a formal planning application (in other words, provided the scheme meets certain criteria, it’s pre-approved). We’ll go into this in a bit more detail shortly.

Where a planning application is required, it has to be in detail (rather than outline), and your application must cover both the physical works and the change of use to residential property. As a rule, a building must be capable of conversion without significant extension or rebuilding to be considered for approval. Conversion of a listed building might be possible, but specific listed building consent would be needed alongside the planning permission.

When assessing a project, you must also consider parking areas, access, any outbuildings and the extent of the garden. All of these elements should normally be wrapped up in your conversion planning application.

Learn more: 23 Projects You Can Do Without Planning Permission

Class Q comes with detailed provisos. For a start, it doesn’t apply in areas of outstanding natural beauty (AONBs), National Parks, The Broads or conservation areas. There are also clear criteria in terms of when the buildings were last in agricultural use, and limits on the size of dwelling(s) to be created. For instance, under PD, you can only convert up to 465m2 of floor space, shared amongst a maximum of five dwellings.

To determine the suitability of a building for conversion, there’s a procedure known as Prior Approval. This involves submitting a form to the council in the same way as a planning application; but the matters the council is allowed to consider under Prior Approval are more limited.

They include transport, highway and noise impacts, flooding and contamination risks, and whether the siting or location is suitable. There will also be some consideration of the design or external appearance (it mustn’t change too much), and whether internal rooms have enough natural light.

PD isn’t the only route to converting a rural property; if your project doesn’t fall within those parameters, you can always make an application for full planning. The chances are your district council’s Local Plan (and possibly the parish’s Neighbourhood Plan) will include a policy that specifically deals with conversions.

These should fall in line with National Planning Policy Framework (NPPF) guidance, which states that isolated new homes in the countryside should be avoided unless, amongst other things, the development would reuse redundant or disused buildings and enhance its immediate setting.

That may sound promising, but many Local Plan policies have a bias towards reusing rural buildings for business purposes, including tourism-related uses like holiday lets, in preference to residential conversion. With that in mind, it’s sometimes necessary to demonstrate that such alternative uses wouldn’t be viable or practical, as part of the justification for a conversion to a dwelling.

Some policies also require marketing to take place for a period, to prove there’s no demand for a non-residential use. Note that the ‘anti residential’ policy bias is out of step with current NPPF guidance and is more likely found in older Local Plans. So, if you do encounter it, check with the council as to how rigorously it is applied.

With many conversion applications it’s necessary to submit a structural survey to demonstrate that the building is sound and capable of conversion without having to be rebuilt. Inevitably there are some structures that are either too decrepit or too flimsy for this to be possible.

Rural buildings can provide a habitat for protected species, most commonly bats, and any application to convert is likely to have to be accompanied by a suitable survey to determine their presence. If bats are found or even just suspected, then follow-on surveys might be required to determine the type and number of the critters. 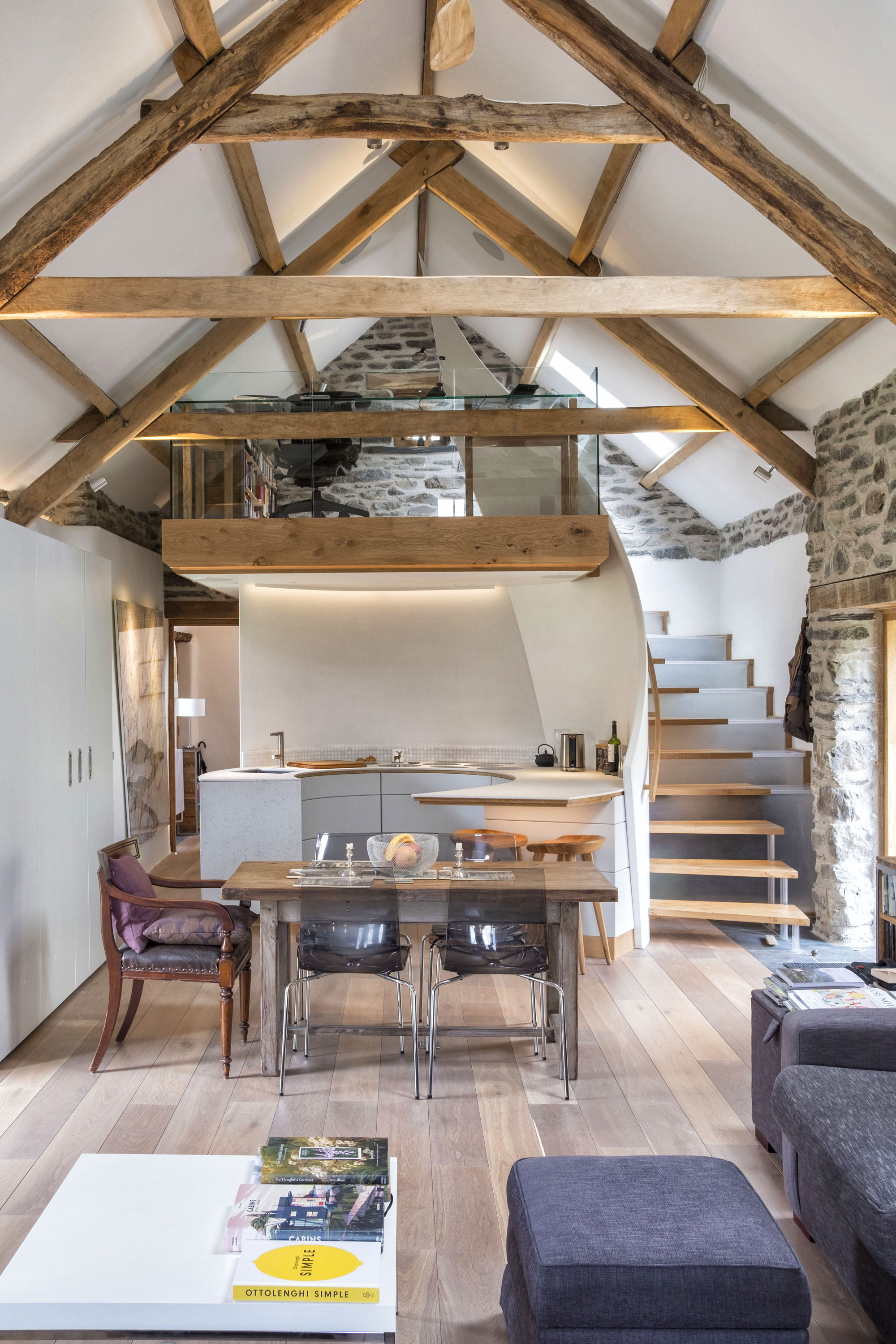 Simon Baker’s sensitive conversion in Snowdonia National Park has created a delightful, light-filled home with amazing views; all without having to punch extra holes in the barn’s fabric

The presence of bats wouldn’t normally be enough to prevent a building from being converted, but it is likely to add both cost and time to a project. The requisite surveys can only be undertaken during the season the creatures are active, which is roughly May to September, and local authorities require surveys to be submitted with an application, rather than allowing them to follow on later.

Another potential roadblock is that former farm or industrial buildings can sometimes be contaminated – for instance, in the form of diesel spillage from machinery. Where this is suspected, councils will require a thorough investigation, and if found, a detailed scheme for removal and disposal. Again, surveys, analysis and treatment can all add cost and delay to a project.

Where you’re looking at a more remote building for conversion, find out whether services are within reasonable striking distance. An old barn with no electricity or water laid on might look appealing, but the cost of bringing in such services over a considerable distance (or investing in the technologies to go off-grid) can be prohibitive.

When you’re converting an old building, and in particular one that’s listed or considered a so-called non-designated heritage asset, the council is likely to want to preserve as much of the original fabric and character as possible.

This generally means limiting the insert of new structural openings (ie windows and doors) and avoiding anything that disguises the original form and purpose of the building. Some of this might chime with what attracted you to the building in the first place; other stipulations may simply feel like stumbling blocks. Quite what might be acceptable is likely to depend to a large extent on the likes and dislikes of the council’s design or conservation officer. So, have a look at other conversion permissions in the immediate area to see what’s been approved. Some favour any alterations or extensions to be very much in keeping with the existing building, while others favour contrasting styles, so it’s immediately clear what’s original and what’s new.

There’s a good deal of variation in the approach to these things across the country, so if you have a particular style of conversion in mind, ensure you look for a building in
an area where that’s likely to be acceptable.

Approved planning permissions for conversion projects tend to be hedged about with conditions. As well as requiring materials and finishes to be in keeping with the existing building, it’s commonplace for restrictions to be imposed on future changes.

The council will achieve this by removing permitted development rights concerning extensions and alterations to the building, along with rights to put up outbuildings in the garden.

Removing PD eligibility doesn’t mean you absolutely can’t do any of these things at a later date, but it does mean that you’ll need to seek planning permission for them. Finally, remember that when converting, it’s vital not to demolish anything that you don’t have permission to remove.

Beyond that, you also shouldn’t allow any of the original structure to collapse during the works. Rebuilding in those circumstances wouldn’t be covered by your existing conversion permission. Do I Need Planning Permission for My Loft Conversion?
by Chris Bates
Next Article