With site setup done, day two of our build heralded the start of work in earnest on the Self Build Education House.

To maximise the use of space on our fairly tight plot, we’re building a basement, which means the groundworks phase of our project is a major undertaking.

For that reason, we put a specialist team in place, ICF Contractors, who are experienced in both our Nudura insulating concrete formwork construction system and basement builds.

Shoring up the earth

Our self build plot had already been cleared by Graven Hill, but we still needed to scrape off and retain the topsoil for reuse as backfill.

The biggest job before we could start excavating the large hole for our basement, however, would be installing some hired sheet piling along the house’s side elevation.

This was part of the structural engineer’s temporary works spec (the elements of a project required to enable development, but which will be removed later).

Digging out a basement means shifting a vast quantity of earth, which can risk undermining neighbouring ground – and with the road so close to our plot, the sheet piling was a necessary protective measure.

The idea was to pull the piles out once the basement was built and the ground stabilised. They were so difficult to get in, however, that it quickly became obvious the only way to get them back out again would be to hire a heavy-duty machine to do the job.

Trouble was, the larger plant could potentially damage the road.

After discussing it with ICF Contractors, who’d flagged up the issue straight away, we agreed to split the cost (£1,500 each) of leaving the piles in and cutting them off.

It meant dipping into our contingency budget right at the start, but the risk of trying to pull them up was too great. We were already learning one of the lessons you’ll often read about in the pages of Build It magazine: namely that getting out of the ground is the riskiest part of constructing a new home.

You can never be exactly sure what’s down there – and hence what the costs will be – until that first spade hits the ground!

With our first real headache resolved, we could get on with digging the giant basement hole. Fortunately, the weather was kind and things progressed quickly.

As we dug down, we could see that the predicated clay soil conditions were correct – and despite a nearby stream, there was no water pooling at the bottom of the excavation.

Wet conditions would really have slowed us down, especially if we’d needed to bring pumps on site to clear out water every morning.

Come the beginning of week three, the hole had been dug out, complete with an access ramp and sloping banks to minimise the risk of anything collapsing.

A layer of concrete blinding was down, the floor slab position had been marked out and ICF Contractors were cracking on with the engineer-designed steel reinforcement for the basement floor slab, ready for the concrete pour later in the week.

Despite the issue with the sheet piles, we were still bang on schedule.

By the time I was back on site bright and breezy on Friday morning for our regular toolbox talk, the formwork and rebar was all set up.

This included the cage for the basement sump pump and some extra plywood inserts to create channels in the floor. Both of these are part of the waterproofing specification.

Our ready-mix concrete (specified by the structural engineer to suit the loadings on our site) arrived over the course of the morning in 7.5m3 lorry loads.

The order sheet was for 30.01m3 (so four trucks), with the .01 meaning we could call in an extra delivery if required. We ended up using almost 37m3 in total, so we needed that contingency.

Next up, ICF Contractors poured the concrete in via a towering tube (known as a boom). They used a vibrating poker tool to encourage the mix to flow all around the steel.

This is a vital step in ensuring the slab performs as designed by the structural engineer. The team then set to work smoothing the concrete, vibrating it again if needed, to deliver a level platform for the build.

The finished slab was spot-on. In fact, ICF Contractors have proved a fantastic team to work with throughout the groundworks and basement phase of the Build It Education House project.

So far they’ve been very efficient, polite, tidy and proactive in making suggestions and discussing options that might improve the scheme. They’ve impressed so much that they’re now doing a lot of groundworks for Graven Hill. 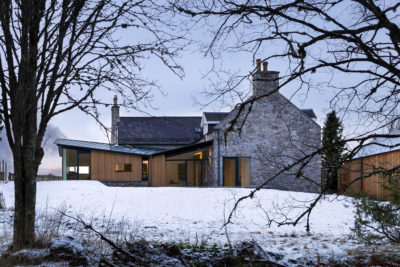