All of the readers’ homes that we feature online and in each issue of Build It magazine inspire and inform thousands of prospective self-builders. But this year two homes were chosen as the very best for the 2014 Build It Awards.

We were inundated with votes for the accolade of Best Self-Build or Renovation project from a shortlist of six fantastic readers’ homes that have appeared in the magazine over the last 12 months.

In an unprecedented turn of events and despite a deluge of votes, this year two projects received the exact same number of votes from readers – so the Build It team thought it was only fair to present two awards, one for Best Self-Build and one for Best Renovation.

The winner of the Best Self-Build accolade is Hannah Jones and Theo Hodnett’s characterful low cost cottage. It was very clear to see that those who voted felt this inspirational scheme will give hope to the next generation of self-builders.

The small but perfectly formed timber frame cottage was completed on a on a tight budget of just £122,000. The couple utilised the local councils enabling scheme to secure the plot and planning permission for their dwelling. The property has been finished to a very high standard – internally and externally – and the homeowners did the majority of this work themselves. Above: Theo is a talented carpenter and put his skills to good use in this project. He fitted the oak flooring and handmade the doors and frames, as well as many other joinery items Above: Hannah’s favourite room in the house is the kitchen. The units were on her wish list from the project’s conception – they are from DeVol’s Shaker range and match the home’s cottage style perfectly Above: Hannah and Theo have added interesting features, such as exposed oak beams and the inglenook fireplace, to bring in extra character to the interiors. The beams were sourced from Border Oak and fitted by Theo

This unique abode was developed from a former shop – breathing new life and creativity into what was once an uninspiring unit. Tim, who is an architect, played a pivotal role in reworking the building into a well-designed and comfortable home. He was not only responsible for the architectural work, but did a lot of the construction himself, too.

The £73,000 project has reintroduced light into the previously dark and dingy space, and the interior elements give a stylish nod to the property’s industrial past. Above: The simple yellow steel staircase, which Tim designed, was welded on site by a local firm. The steel ceiling is similar to what’s usually found in warehouses or supermarkets. It was specified partly because it could span the narrow property with a single piece, helping to reduce the amount of complex engineering needed Above: Tim has adopted a simple, neutral colour scheme to act as a backdrop for a mix of furniture styles in the basement living area Above: Central to the project was the idea of reintroducing light back into the building, which meant reinstating a large glass ‘shop front’ window at he front of the house

The Build It Awards celebrate all aspects of self-build and renovation, including completed projects, products, services and suppliers.

See the full list of 2014’s Build It Awards winners 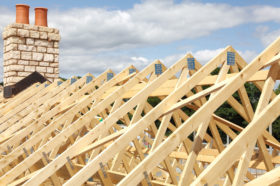 Build It Awards Winners 2014
by Build It